Speaking of his immediate next film, Zero, it also stars Anushka Sharma, Katrina Kaif and R Madhavan in the lead. 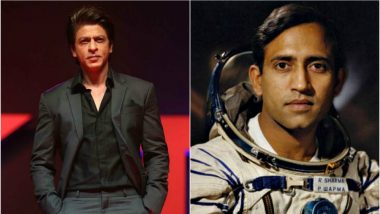 Shah Rukh Khan's next film is on the to-watch list of the every filmy being and we are not even surprised.  No, we are not talking about the Aanand L Rai directorial 'Zero' but the tentatively titled project 'Salute'. The film which is based on Indian astronaut Rakesh Sharma is quite in the buzz for a while. After Aamir Khan reportedly opted out of the film, it is SRK who decided to take it forward. The film was apparently supposed to go on floors in September but now it is delayed to October, reports DNA.

A source close to the development told the daily, "SRK’s dates for Salute are yet to be locked. After the dates are finalised and the cast has been signed on, the film’s makers will make an official announcement. Though the movie was initially planned to go on floors this September, it is now being deferred by a month and will begin only in October."

Earlier, the same daily had reported that the 52-year-old star will take a break of 3 months after wrapping up the shoot of Zero movie. He apparently needs this break to prep up thoroughly for his role as an astronaut. The star will also study the nuances of an astronaut along with his team, during these three months. Now, that the film has been delayed by a month, the team will get more time prep for the shoot of the space drama, we hope.

Speaking of his immediate next film, Zero, it also stars Anushka Sharma, Katrina Kaif and R Madhavan in the lead. The team is currently off for a 45-day schedule in US to shoot some portions at NASA. We will keep you updated with more details on this SRK-Anushka-Kat starrer film which will release on December 21. Stay tuned.

(The above story first appeared on LatestLY on Jun 07, 2018 08:51 AM IST. For more news and updates on politics, world, sports, entertainment and lifestyle, log on to our website latestly.com).