Soorarai Pottru, the Tamil-language movie is directed by Sudha Kongara and starring superstar Suriya in the lead. As per reports, Shahid Kapoor has been approached to play the lead role in the Hindi remake. 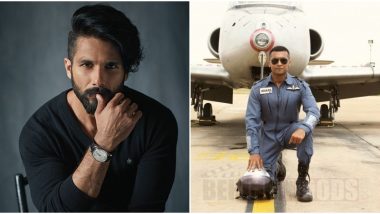 Looks like Shahid Kapoor has turned out to be filmmakers and producers favourite when it comes to Hindi adaptation of a South film. He was first seen in Kabir Singh, which was a remake of Telugu blockbuster Arjun Reddy, and the Hindi version also performed well at the box office. He is currently busy with Jersey, which is a remake of the Telugu film of the same name that starred Nani in the lead. Now as per a report in Mid-Day, Soorarai Pottru is also in plans to be adapted in Hindi and makers are have approached Shahid Kapoor to play the lead role. Soorarai Pottru: This Still Of Suriya with Aparna Balamurali Is Winning Hearts!

The report cites that Shahid Kapoor is yet to give a nod for Soorarai Pottru Hindi remake. Regarding this remake and Shahid being approached for the role, a source revealed to the tabloid, “The film was always supposed to be made in multiple languages. Shahid enjoyed a mammoth hit in Kabir Singh last year, which was the Hindi adaptation of the Telugu blockbuster Arjun Reddy. So, he was the first choice of the makers. The actor is currently going through the script. After the leading man is locked, the team will zero in on the principal cast.” Shahid Kapoor Misses Being On The Sets Of Jersey (View Pic).

(The above story first appeared on LatestLY on Jun 17, 2020 08:31 AM IST. For more news and updates on politics, world, sports, entertainment and lifestyle, log on to our website latestly.com).