Shilpa Shetty had shared a picture of herself from the Maldives having fun on the beach wearing a leopard-printed bikini. While people went WOW! we just couldn't help rewind back to the 90s when she wore something similar to move to the beats of the chartbuster of the 90s, Churake Dil Mera Goriyan Chali from Main Khiladi Tu Anari 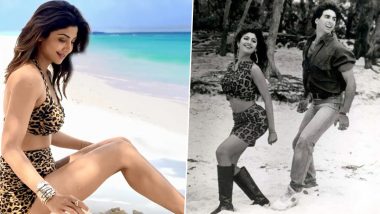 Who doesn't remember or doesn't groove on 'Chura Ke Dil Mera' from Main Khiladi Tu Anari? Even when the movements were a little stiff, we have tried to mimic the same. 90s tracks have their own way of affecting their listeners. You even remember the interlude music between two paras. So it isn't surprising when we immediately went back to this hit chartbuster from the 90s the moment we saw Shilpa Shetty Kundra in a leopard-printed bikini. That's one outfit from the 90s we will never forget because you can't just unsee that. It stays with you and of course, Shetty's long legs. Shilpa Shetty Celebrates Daughter Samisha’s First Birthday by Sharing a Super Adorable Video in Which She Says ‘Mumma’ – WATCH

Shilpa Shetty is in the Maldives, soaking in some Sun and frolicking on the beach. She chose the 'Bounce' song from Dostana for her walk on the beach but for us, it will always be 'Churake dil mera, goriyan chali'.

Shilpa Shetty is easily much hotter than even the sun. Look at her walk...

This is what we see

When Main Khiladi Tu Anari completed 25 years in 2019, Shilpa shared a video on Instagram to celebrate it where her staff was seen recreating the moves.

(The above story first appeared on LatestLY on Feb 26, 2021 01:52 PM IST. For more news and updates on politics, world, sports, entertainment and lifestyle, log on to our website latestly.com).