Shruti Haasan Opens Up About Working With Family in a Film 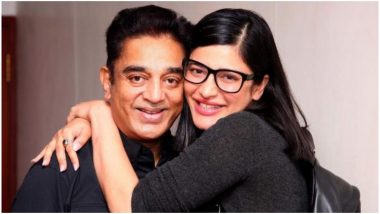 Mumbai, August 9: Actress Shruti Haasan says that working with her family in a film will not necessarily make it a great film.

Shruti is the daughter of veteran actors Kamal Haasan and Saarika. Her sister Akshara is an actress, too. She says she has not thought of working with all of them together.

"I tell you why because that doesn't determine that it will make a great film. Everybody from the same family. That's absolutely not what's going to determine that at all," Shruti told IANS. Shruti Haasan on Nepotism: 'Doors Opened for Me Because of My Surname'.

She added: "I think films have a life of their own, which is really wonderful and then we kind of become a conduit to the energy and destiny of the film, and that can be with anybody. I don't necessarily think that it would be with my family."

(The above story first appeared on LatestLY on Aug 09, 2020 10:58 AM IST. For more news and updates on politics, world, sports, entertainment and lifestyle, log on to our website latestly.com).