Sooryavanshi is the upcoming action drama, starring Akshay Kumar and Katrina Kaif in the lead roles. Akshay and Katrina who were last seen together in Tees Maar Khan, are reuniting almost after a decade. 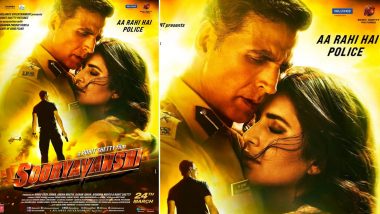 Sooryavanshi is the upcoming action drama, starring Akshay Kumar and Katrina Kaif in the lead roles. This is not the first time that we would be watching this lead pair together on the big screens. Akshay and Katrina who were last seen together in Tees Maar Khan, are reuniting almost after a decade. And fans are eagerly waiting to see them together, and here is a brand new poster, featuring AKshay and Katrina. The former is seen holding Kat tight in his arms amidst the mayhem in the city. Sooryavanshi Trailer: Akshay Kumar Teams Up With Singham and Simmba To Save The City (Watch Video).

Akshay Kumar is playing the role of DCP Veer Sooryavanshi, the chief of the Anti-Terrorism Squad. In this new poster, which is intense and emotional, there seems to be lot of drama happening in the backdrop. Well, Sooryavanshi, which is slated to release on March 24, is the fourth installment of Shetty’s Police Universe. This film would also feature Ajay Devgn and Ranveer Singh making an extended cameo appearances. And the film’s trailer, did give a glimpse in which these four fabulous actors were seen together. Sooryavanshi: Is Rani Mukerji Making A Cameo Appearance In Akshay Kumar-Katrina Kaif Starrer?

At the trailer launch of Sooryavanshi, Akshay Kumar was all praises for Katrina Kaif. He was quoted as saying, “There is one scene in which Katrina has performed so beautifully that after the shot I have become a big fan of her and her acting talent. Earlier, I was admirer of her beauty but after this film, I have become admirer of her acting. She has done a brilliant job in this film. When she started off, she didn't know a single word of Hindi but today she is working with big stars of this industry.” Keep watching this space for more updates from the world of showbiz!

(The above story first appeared on LatestLY on Mar 05, 2020 02:01 PM IST. For more news and updates on politics, world, sports, entertainment and lifestyle, log on to our website latestly.com).