Soumitra Chatterjee never had Bollywood aspirations and on his birthay today, we tell you three Hindi movies that he rejected which went on to become epics! 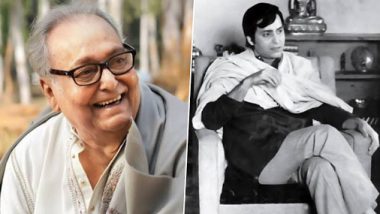 Soumitra Chatterjee is one of the most accomplished actors of Indian Cinema. Although he has worked mostly in the Bengali Cine world, the actor's filmography boasts of Satyajit Ray's Apur Sansar and The Feluda series, Koni, Saat Pake Bandha, Charulata, Araner Din Raatri, Jhinder Bandi and many such epics. He is still working and doing movies that will inspire generations. So did this accomplish actor never get offered Hindi films? Well, he did and in hordes. Soumitra Chatterjee, Aparna Sen Remember Nabaneeta Dev Sen

Bengali films or literature had a great influence on a lot of movies that were made in the 60s and 70s. Also because a lot of Bengali filmmakers were making Hindi movies, that period saw some of the best movies ever made in the history of Indian Cinema. So quite obviously, Soumitra Chatterjee too was offered Hindi movies but he turned them all down.

Amitabh Bachchan wasn't the first choice for the role of Dr Bhaskar Banerjee in Anand. Hrishikesh Mukherjee had offered it to Soumitra Chatterjee as well. But he turned it down due to date issues. Speaking to TOI, he had said, "Hrishikesh Mukherjee in his 1971 film ‘nand approached me to play the role of the famous character Dr. Bhaskar Banerjee. I had to say no because the shooting dates clashed with my commitments Bengali cinema. But I have no such regrets for not accepting the role."

Bollywood again showed up at his doorsteps in the form of Shyam Benegal's Kalyug but he turned that down too. He added, "The next film I refused was Shyam Benegal’s 1981 Kalyug which is a modern-day take on Mahabharata. Kalyug was produced by Shashi Kapoor and he played Karan (Karna). Shashi offered me the character Dharam Raj (Yudhisthira) but I said no because I felt it’s not strong enough for my first Hindi film. Shashi and I were close friends and we always admired our professional decisions, so Shashi didn’t press me to do the role."

The third incidence was fairly recent when Soumitra Chatterjee was offered the role of a judge in Amitabh Bachchan's Pink. He rejected that too as he didn't find the role strong enough.

The best part about all these misses is Soumitra Chatterjee regrets none of it as he never had Bollywood aspirations. That is completely justified. Why would you want to work in Bollywood or Hindi Cinema when you are working with the magnanimous Satyajit Ray?

On that note, Happy Birthday Soumitra Chatterjee. Thank you for being born!

(The above story first appeared on LatestLY on Jan 19, 2020 08:40 AM IST. For more news and updates on politics, world, sports, entertainment and lifestyle, log on to our website latestly.com).