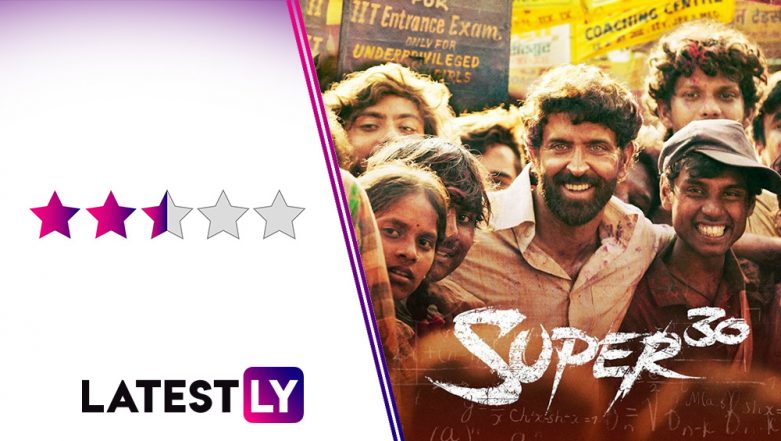 Super 30 Movie Review: In Super 30, Anand Kumar (Hrithik Roshan, with a paler brownface) is narrated the tale of Eklavya by a rickshaw driver. About how he lost his thumb as gurudakshina to Dronacharya, so that the son of a king can remain the champion. The story pricks Anand's conscience, reminding him of how his father used to say 'ab raja ka beta raja nahi banega' (a king's son will no longer be the king). Only the truly deserving will get to claim that. This mantra motivates Anand to realign his goals and gets him to teaching the underprivileged IIT aspirants, while at a great cost to his personal life and comforts. Vikas Bahl Attends Super 30 Screening with Hrithik Roshan Post Getting a Clean Chit in Sexual Harassment Allegation.

It's another matter that the lead star himself is a raja ka beta... while the actor, far more suited to play Anand Kumar (both in looks and dialect) - the always delightful Pankaj Tripathi - is relegated to a supporting role.

But then let's leave all the nepotism chatter to Kangana Ranaut and talk about how Super 30, directed by Vikas Bahl, is as a film. The movie is named after the chain of coaching classes owned by a Maths genius from Bihar, the real-life Anand Kumar. As the film claims (and some real-life lawsuits and controversies contradict), Anand Kumar teaches poor IIT aspirants for free.

Since the movie is made with his blessings, Super 30 doesn't delve into the controversies but rather, talk about his struggles to make his first batch get a 100% success rate. Before we have that, Super 30 spends way too much time in Anand Kumar's personal life, just so that you can connect with his struggles. Not a bad idea, but the treatment is quite melodramatic and often cosmetic.

While Anand's portions with his parents have a couple of endearing moments, his love story with his rich girlfriend (Mrunal Thakur) is merely passable and hackneyed. There is a distinct lack of chemistry between Hrithik and Mrunal. Not forgetting the fact that the girlfriend has basically nothing important to do in a movie, save for one scene in the second half. I even forgot what her character's name was.

The first half covers Anand's struggles in getting into Cambridge and ditching it all to sell papad on the streets for a living. He is rediscovered by a scrupulous coaching class owner Lallan Singh (Aditya Shrivastava) who uses Anand's name to bring IIT aspirants for his classes and take huge sums from them. Anand, seeing this opportunity to help his family out, works for Lallan and earn big money in the process. And then he gets that prick of conscience.

This change in the arc for the main protagonist should have been really fascinating. But Super 30 moves through these scenes with a very indifferent approach, that we feel like writing a very humdrum Algebra exam. There are some scenes that definitely get to you. Like Anand's mother blushingly telling her husband that she doesn't need the blanket (that she is selling) anymore because she is 'hot' (in fact, they have better chemistry than the leads). Or when the family gets into an impromptu dance, with Hrithik, a terrific dancer in real life, pulling out some awkward moves. I needed more such scenes to connect with Anand as a character, but what I get is pretty okayish stuff. I really don't know how true the movie is to the real Anand Kumar's life, but the over-generous serving of sentimentality and melodrama in these portions does little to make us feel invested in his backstory.

The second half fares better when we get to Anand (Hrithik, now with a heavier brownface) teaching his first batch of 30 students for free. We see Anand and the students struggle through hunger, penury and fierce rivals to clear roadblocks and win the final race. The kids are all played by, what I want to call as, naturals, fitting into their parts well. But apart from the frequent reminders that they are poor, their characters are not exactly etched well and therefore, remain barely worth remembering.

The second half reminded me a lot about Hichki, sharing similar plotlines and challenges. At least the teens in the Rani Mukerji-starrer feel properly built up as characters as their teacher. Also, Hichki handles the rich-poor divide better than what Vikas Bahl and writer Sanjeev Dutta does with Super 30.

The latter reiterates the idea of how everyone should have equal opportunities, but then does that by slamming the other side of the divide. There are too many dialogues thrown around by the 'richer' characters that belittle the underprivileged, just so that message of 'raja ka beta raja nahi...' gets a stronger push.

However, this lack of proper socio-political discussion is hardly the Achilles' Heel for Super 30. Instead, the second half, like the first, also suffers from a very superficial execution with a narrative that reeks of familiarity. Anand's unusual methods of teaching raise curiosity, but is barely impactful. There is a random journalist character (Amit Sadh), who pops up as a tool of convenience, rather smoothly fitting himself into the narrative. The villains, Lallan and the politician supporting him (Pankaj Tripathi) feel like cardboard caricatures, inspite of the committed performances of the actors playing them.

Watch the Trailer of Super 30 Below:

Super 30 could have pulled itself above its flaws had it got its Maths rights. I mean, using the characters' obsession with mathematics to create some impactful imagery. Bahl does try it out, like the climax where Anand's students use their lessons to stave off a murderous attack. But more often, it feels like an opportunity lost. Just like the "Basanti No Dance" song sequence, that starts off on a very powerful note - of the less privileged trying to fit themselves into the world of the privileged. Only for it to taper into hackneyed mush. With a length of 155 minutes and nothing much to surprise us in the narrative, Super 30 often feels a languorous equation at times.

Hrithik Roshan is a very capable performer and his acting in the scenes where he lets his emotions out is a treat to watch. But his earnest performance is hindered by his unnaturally heavy accent that makes us feel he is imitating Amitabh Bachchan speaking Bihari. This flaw comes out strongly when he is alongside actors like Aditya Shrivastav and Pankaj Tripathi (both terrific in roles that don't do justice to them), when the latter two delivers dialogues with the same accent in a natural flair.

Mrunal Thakur, who was excellent in Love Sonia, doesn't leave much of an impact here, more so, because how her character is written. Nandish Singh, who plays Anand's brother Pranav, is decent, while Virendra Saxena pitches in a heart-warming act. Amit Sash plays to the galleries (a dialogue of his about the media feels an uncanny rebuke to a recent spat involving Kangana. Strange coincidence!). But his character feels very randomly inserted.

Controversial or not, Anand Kumar's life is inspiring enough to be made into a movie. But Super 30 turns out to be a very predictable biopic that feels cosmetic any which way you look at it. The performances are sincere, especially that of Hrithik Roshan and Pankaj Tripathi's, and there are some good moments strewn around. Overall, though, Super 30 spends too much in deconstructing a used formula, without giving us the satisfaction that you get when you solve a brilliant equation.