Sushant Singh Rajput Case: Ankita Lokhande Shares Pictures of Bank Statements Showing She Was Paying EMIs For Her Flat and Not the Late Actor (View Tweet) 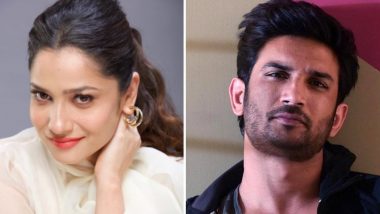 Sharing the bank transfer documents, Ankita wrote, "Here i cease all the http://speculations.As transparent as I could http://be.My Flat's Registration as well as my Bank Statement's(01/01/19 to 01/03/20)highlighting the emi's being deducted from my account on monthly basis. There is nothing more I have to say." The actress' tweet received a lot of support from fans who maintained that they never doubted her. A user commenting on Ankita's post wrote, "We know you are being targeted but we trust you."SSR Case: Ankita Lokhande Supports Shweta Singh Kirti’s CBI Demand, Says ‘We Will Find the Truth and Get Justice Di’.

Here i cease all the https://t.co/Hijb7p0Gy6 transparent as I could https://t.co/YUZm1qmB3L Flat's Registration as well as my Bank Statement's(01/01/19 to 01/03/20)highlighting the emi's being deducted from my account on monthly basis.There is nothing more I have to say🙏 pic.twitter.com/qpGQsIaOGw

As for the ongoing probe, CBI has recorded statements of SSR's father KK Singh, sister Priyanka and his other family to record their statements. Also, the CBI is waiting for the Supreme Court’s permission before they launch a proper probe in Maharashtra.

(The above story first appeared on LatestLY on Aug 15, 2020 08:29 AM IST. For more news and updates on politics, world, sports, entertainment and lifestyle, log on to our website latestly.com).