Longtime lovebirds Varun Dhawan and Natasha Dalal are a happily married couple and from celebs to fans all have poured in lots of love for them on social media. 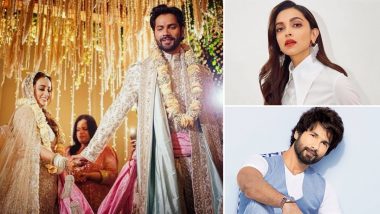 The much-awaited Bollywood wedding took place on January 24 in Alibaug. Longtime lovebirds Varun Dhawan and Natasha Dalal are a happily married couple and from celebs to fans all have poured in lots of love for them on social media. Varun and Natasha’s marriage was low-key affair that took place in the presence of the couple’s family members and close friends. The duo opted for a minimal crowd considering the ongoing pandemic. Post the wedding ritual, Varun shared the first photo with his wife, giving a glimpse of the beautiful wedding ceremony, and since then B-town celebs and fans have been congratulating the newly married couple. Varun Dhawan and Natasha Dalal are Married! Actor Shares First Pictures as a Couple With a Lovely Caption.

Deepika Padukone, Shahid Kapoor, Preity Zinta, Parineeti Chopra, Karan Johar, Katrina Kaif, Armaan Malik and many others have extended their heartfelt congratulations to Varun Dhawan and Natasha Dalal. Varun’s close pals from the industry who were seen in attendance for the wedding included Karan Johar, Manish Malhotra, Shashank Khaitan and Kunal Kohli. Let’s take a look at the comments dropped by celebs and also the posts shared by a few of them for Varun and Natasha. Varun Dhawan Weds Natasha Dalal: Is Turkey The Honeymoon Destination On The Couple's Mind? 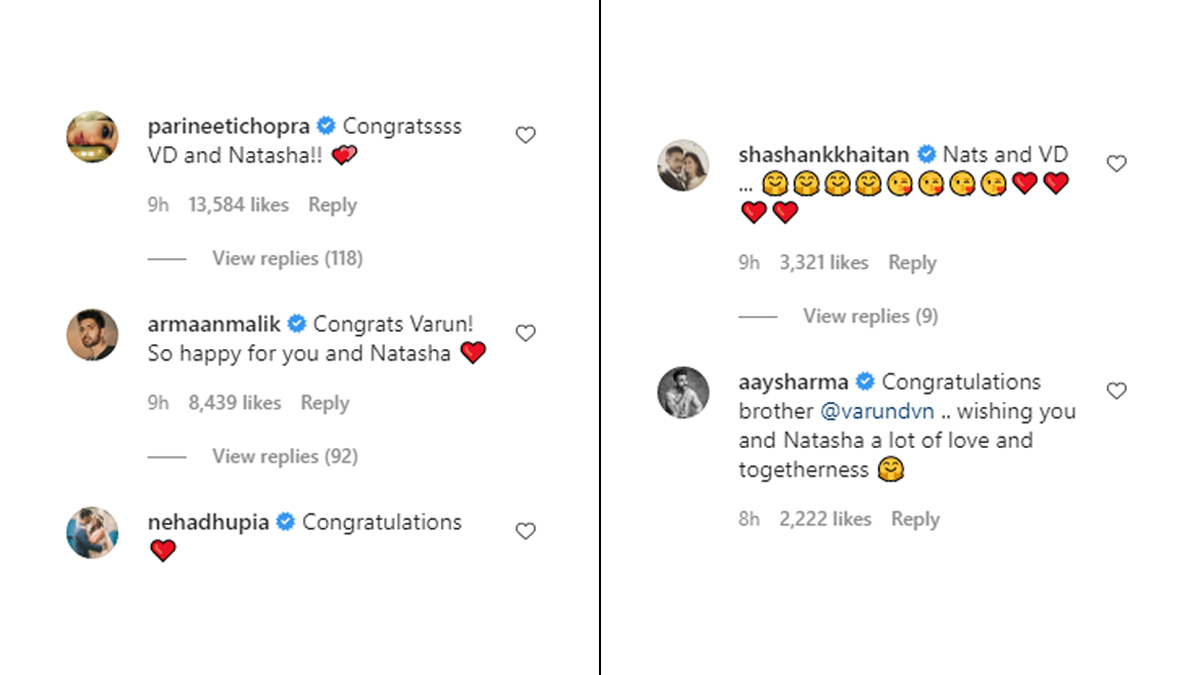 Tons Of Love For The Newly Married Couple 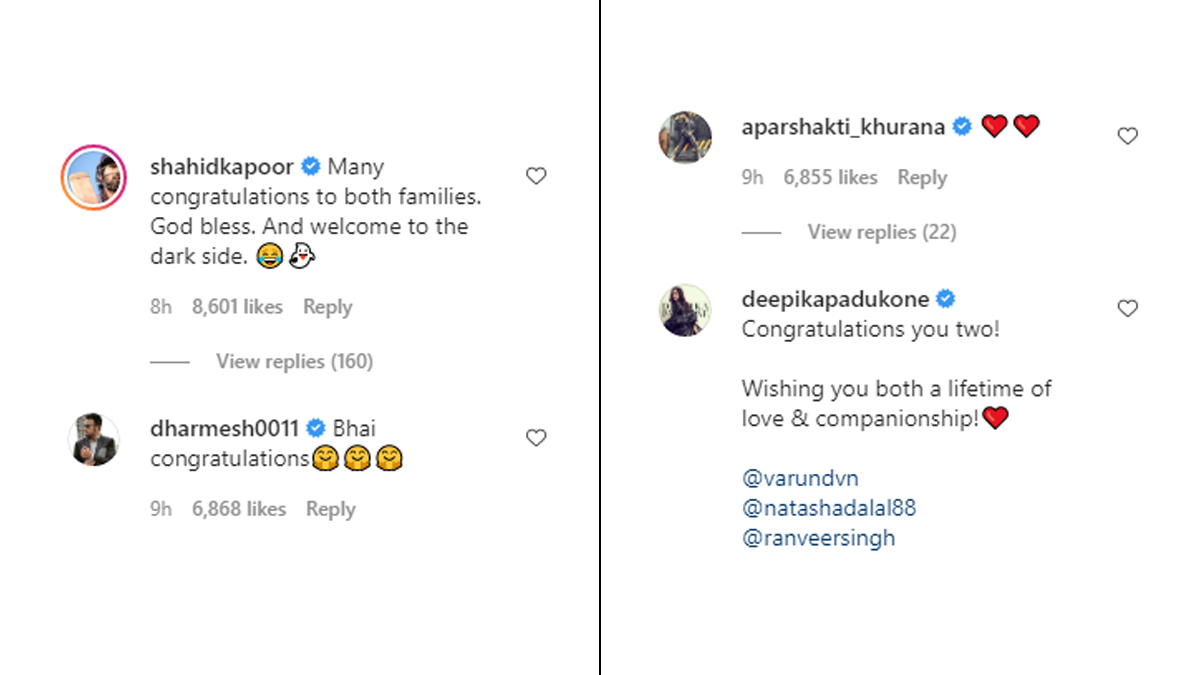 Wishing A Great Journey Ahead 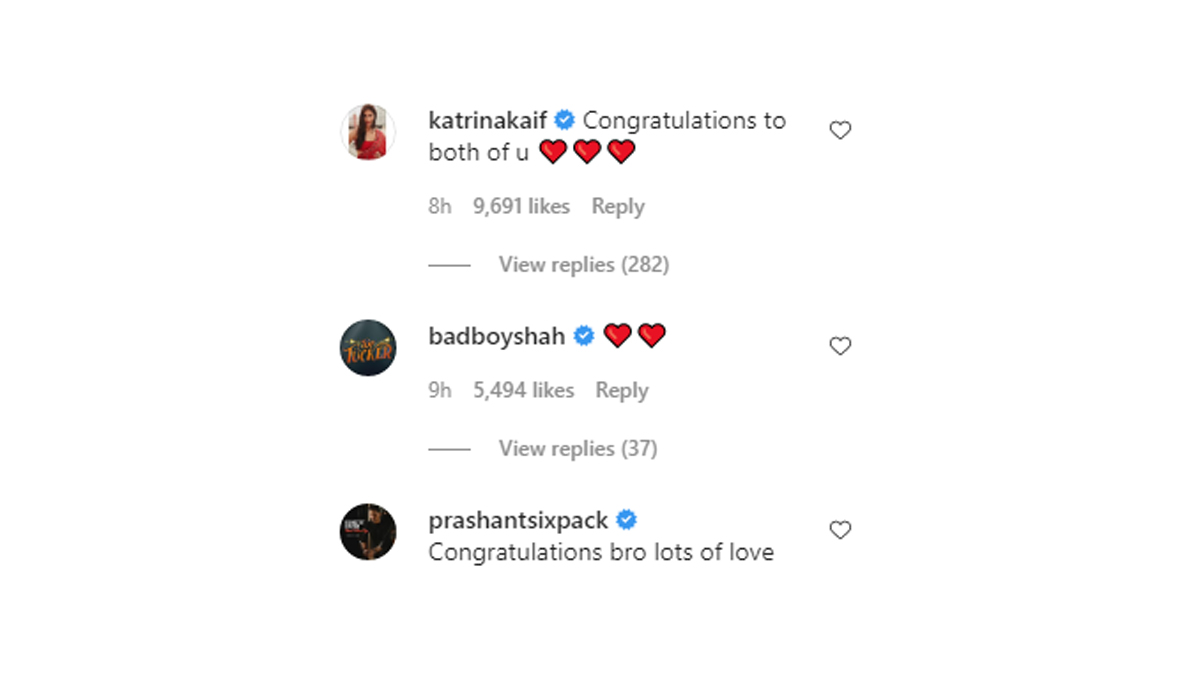 Varun Dhawan and Natasha Dalal had opted for a highly restricted guest list and also decided on a no-phone policy. The wedding was graced by only 50 people. The couple’s wedding reception will reportedly take place on January 26. Heartiest congratulations to Varun and Natasha on their marriage!

(The above story first appeared on LatestLY on Jan 25, 2021 08:34 AM IST. For more news and updates on politics, world, sports, entertainment and lifestyle, log on to our website latestly.com).