Varun Dhawan Was Not The First Choice For Pratik Gandhi's Role In Scam 1992, The Actor Clarifies

Varun Dhawan took to Twitter to quell claims that he was the first choice for Pratik Gandhi's Harshad Mehta in Scam 1992. 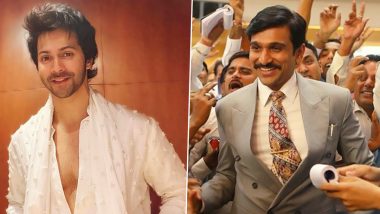 Scam 1992 is one of the most loved, revered and liked OTT web series of this year. The show has managed to appease everyone and is still being viewed by many. Pratik Gandhi's Harshad Mehta got rave reviews and made him an overnight star. But suddenly a Twitter user revealed that he wasn't the first choice but Varun Dhawan. The user claims that the Coolie actor was first approached for the role and when he couldn't accept it apparently, it went to Gandhi. The actor has now come out to slam these reports saying the role always suited Pratik Gandhi and no other. Scam 1992 Review: Pratik Gandhi Towers Tall in Hansal Mehta’s Meticulous Retelling of the Harshad Mehta Story

Varun wrote on Twitter, "Really not true I think the only choice for this show can be #pratikgandhi absolutely brilliant he is. big fan #scam 1992." The user claimed that he found the information online. The article reads that Varun was supposed to play Harshad Mehta in a Paresh Rawal production. But that got cancelled.

Really not true I think the only choice for this show can be #pratikgandhi absolutely brilliant he is. big fan #scam 1992 https://t.co/IYD7Cv1gIN

In this world of rampant fake news, it's really appreciable that Varun clarified it. The revamped SonyLIV is doing an incredible job of bringing the right content on their digital platform and Scam 1992 is a glowing example.

(The above story first appeared on LatestLY on Nov 25, 2020 02:34 PM IST. For more news and updates on politics, world, sports, entertainment and lifestyle, log on to our website latestly.com).