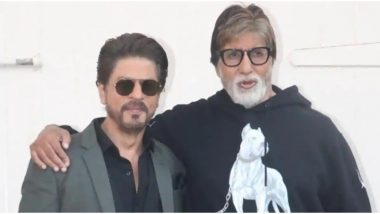 Amitabh Bachchan recently took to his Twitter account to rectify the number of his tweets. You know the veteran star is obsessed with his tweet numbering and follows the practice religiously. He even apologises to his fans when they point out an error in his numbering and ensures that he gets it right the next time. But did you ever wonder about the reason behind his same obsession?  Well, Shah Rukh Khan did and he even asked Big B to explain the reason behind his number game on Twitter. Badla Unplugged Teaser: Shah Rukh Khan and Amitabh Bachchan Sing 'Ek Dusre Se Karte Hai Pyaar Hum' As They Indulge In a Candid Chat (Watch Video).

During their interactions for Badla promotions, Shah Rukh Khan had asked him about his weird obsession by questioning, "On Twitter, when you post something in English or Hindi and other languages, you have numbered them, T- something..?" To this,  Amitabh Bachan replied, "The reason I do this is because if I want to track on which day I said something, I'll have a reference point." The Main Hoon Na later thanked him for enlightening us. Amitabh Bachchan Tweets Another WhatsApp Forward On Coronavirus, Twitterati Requests Big B to Uninstall the App after His Rendezvous with Fake News.

apologies for the error ..

You Can Check their Conversation Here

Amitabh Bachchan's quite possessive about his Twitter handle. From questioning the microblogging site for reducing his number of followers to rectifying his tweet numbering and sharing WhatsApp forwards, Big B's Twitter handle is definitely one amusing place to visit. No, don't even try to deny this.

(The above story first appeared on LatestLY on Sep 19, 2020 03:00 PM IST. For more news and updates on politics, world, sports, entertainment and lifestyle, log on to our website latestly.com).