Actor Kubbra Sait has a funny anecdote about attending the mega wedding of Bollywood superstars Ranveer Singh and Deepika Padukone. "I met him (Ranveer Singh) many eons ago when I was hosting a show in a crowd of 5,000 people. 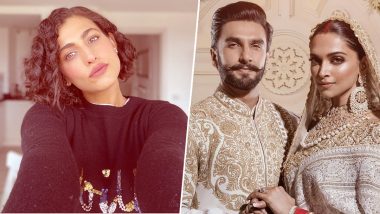 Actor Kubbra Sait has a funny anecdote about attending the mega wedding of Bollywood superstars Ranveer Singh and Deepika Padukone. "I met him (Ranveer Singh) many eons ago when I was hosting a show in a crowd of 5,000 people. You don't imagine to be remembered by a superstar of that order when you are hosting a show, but he remembered me. Then when 'Sacred Games' released he actually texted me and I lost my plot. Kubbra Sait Comes Out in Support of Rhea Chakraborty After Her NCB Arrest, Says ‘Still Not a Murderer’ (Read Tweet)

He told me something like, 'kya Boss, you are a daredevil'! I told him in return, 'don't forget to invite me to your wedding'. So that's how I think I earned myself an invite and he very generous and kind. I would like to say, I gatecrashed his wedding with an invitation!" recalled Kubra, while speaking on a chat show. Kubbra has also shared screen space with Ranveer in the 2019 film "Gully Boy". On her role in the show "Sacred Games", Kubbra shared how, one day her co-actor Nawazuddin Siddiqui could not recognise her! Kubbra Sait Shares She Is Blocked by Kangana Ranaut on Twitter, Says ‘We Are Katti and She Didn’t Even Tell Me’

"I remember once I had not worn my wig and my hair was big and with curls. I went and sat next to him and he didn't recognise me. He looked away and went back to looking on his phone. Five minutes later I asked, 'do you want to say hi to me?' he was like, 'Arre aap hain!' I replied, 'haan, mai hoon'. Then he said, 'Nahin, woh aapka taam jhaam nai tha (referring to her wig), so didn't realise it was you," Kubbra said.

(The above story first appeared on LatestLY on Oct 31, 2020 01:14 PM IST. For more news and updates on politics, world, sports, entertainment and lifestyle, log on to our website latestly.com).