Disney has said that it will delay the phased reopening of its theme parks California due to a surge in the number of COVID-19 cases in the US state. "The state of California has now indicated that it will not issue theme park reopening guidelines until sometime after July 4," Xinhua news agency quotd the company as saying on Wednesday. 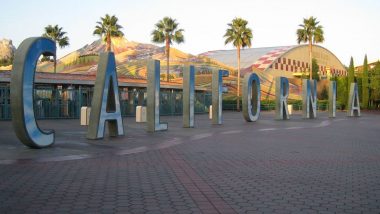 Disney has said that it will delay the phased reopening of its theme parks California due to a surge in the number of COVID-19 cases in the US state. "The state of California has now indicated that it will not issue theme park reopening guidelines until sometime after July 4," Xinhua news agency quotd the company as saying on Wednesday. "Given the time required for us to bring thousands of cast members back to work and restart our business, we have no choice but to delay the reopening of our theme parks and resort hotels until we receive approval from government officials. Hong Kong Disneyland to Reopen This Week With Reduced Capacity Under Social Distancing Guidelines

"Once we have a clearer understanding of when guidelines will be released, we expect to be able to communicate a reopening date," the statement added. The Disneyland Resort, which is home to two theme parks -- Disneyland Park and Disney California Adventure Park -- was scheduled to reopen on July 17, pending state and local government approvals, after being closed for months amid the COVID-19 pandemic, according to an earlier Disney plan announced last month. July 17 is the 65th anniversary of the opening day of Disneyland Park. Disney’s California Theme Park to Open Next Month Despite COVID-19 Pandemic

"We developed enhanced health and safety protocols for both cast and guests at Shanghai Disney Resort, Hong Kong Disneyland Resort and Walt Disney World Resort that have been approved, allowing us to reopen in a responsible manner and bring our cast members back to work," the company said. As a result of the pandemic, Disney closed its North American parks and resorts, cruise line business and Disneyland Paris in mid-March, while the company's Asia parks and resorts were closed even earlier.

A coalition of labour unions representing 17,000 Disneyland Resort employees expressed their concern over the July reopening plan in a letter last week to California governor Gavin Newsom, saying that they were "not yet convinced it is safe to reopen the parks" despite intensive talks with the company. Disney said on Wednesday that the company has "had positive discussions and (we) are very pleased to have signed agreements from 20 union affiliates, including the Master Services Council, which represents more than 11,000 of our cast members".

California's new COVID-19 cases continued to rise in recent days as the state was moving forward with its reopening plans. It saw a 69 per cent increase in new cases in just two days as it reported 7,149 new cases of COVID-19 over a 24-hour span on Wednesday, shattering the daily record for new infections for a second straight day. The company said that the signed agreement details plans that include enhanced safety protocols that will allow the company to responsibly reopen and get thousands of its cast members back to work.

The Shanghai Disneyland reopend on May 11 under a slew of health and safety measures, becoming the first among six Disney theme parks worldwide to welcome visitors again. The company said last month that COVID-19's estimated impact on the US entertainment giant's income from continuing operations before income taxes was as much as $1.4 billion during the second quarter for the fiscal year 2020.

(The above story first appeared on LatestLY on Jun 25, 2020 12:24 PM IST. For more news and updates on politics, world, sports, entertainment and lifestyle, log on to our website latestly.com).