Doordarshan has given all those born in the late 80s and early 90s some fond memories. From families to neighbours to friends, it brought so many of them together to watch some amazing shows. 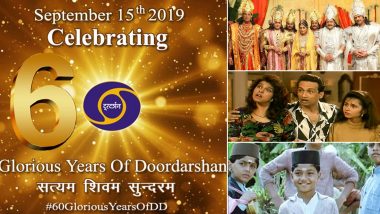 The iconic public service broadcaster of India, Doordarshan, is celebrating its 60th anniversary on September 15, 2019. The ones who are born in the late '80s and '90s will never be able to forget the classic shows that this channel has given. Founded on September 15, 1959 by the Government of India, Doordarshan is the country’s "largest broadcasting organisations in studio and transmitter infrastructure". When we talk about this channel - Mahabharat, Dekh Bhai Dekh, Malgudi Days, are some of the popular shows that comes our mind. Did You Know Karan Johar, Ashutosh Gowariker and Urmila Matondkar Starred in India’s Own Version of Stranger Things Back in the ’80s?

Doordarshan owned by the Broadcasting Ministry of India and one of Prasar Bharati's two divisions, is loved by generations of Indians. On 60 glorious years of Doordarshan Shashi Shekhar, CEO of Prasar Bharati said, “It's a moment to recognise that it’s not that Doordarshan has gotten older, but it is getting newer for digital audiences.” There are many who have shared their fond memories associated to Doordarshan. Let’s take a look at some of the iconic shows made our childhood days memorable.

This comedy series starring Shekhar Suman, Farida Jalal, Vishal Singh, Navin Nischol, among others premiered on DD Metro on May 6, 1993. It revolved around the Diwan family (joint family) who lived in an ancestral bungalow. It focused the hurdles that a joint family faced, be it related to work or tackling relationships. But yet this heartwarming family entertainer was one of the most loved shows of the '90s.

Mahabharat was a show based on Hindu mythology aired on DD National in October 1988. It was 94-episode Hindi series, with each episode running for an hour long. The title song crooned Mahendra Kapoor was a huge hit back then and cannot be ever forgotten. This is the most successful Mahabharata series ever produced for television.

Malgudi Days was adapted from the collections of short stories written by RK Narayan from his book of the same name. This series was first aired on Doordarshan in 1987. The show focused on the lives of the people living in the small town of Malgudi and how they have to face trials and tribulations.

The children’s show Shaka Laka Boom Boom was first aired on DD National in October 2000 and year later it was taken up by Star Plus. The first season focused on the character Sanju played by Kinshuk Vaidya finding a magical pencil. This pencil had the ability to bring things drawn with it to life and that left many children amazed.

How can we forget Fauji, which marked the debut of Shah Rukh Khan aka King Khan in the small screen industry? The show was aired on DD National in 1989. SRK played the role of Lt. Abhimanyu Rai.

The minute we say it reminds us of Mukesh Khanna (who was also the show’s producer), the superhero. This show was aired on Doordarshan from September 1997 to March 2005.

Doordarshan has given all those born in the late 80s and early 90s some fond memories. From families to neighbours to friends, it brought so many of them together to watch some amazing shows. Well, one cannot deny that it was golden age in the world of television!

(The above story first appeared on LatestLY on Sep 15, 2019 02:27 PM IST. For more news and updates on politics, world, sports, entertainment and lifestyle, log on to our website latestly.com).