Aubrey O'Day once claimed that reality TV star Kim Kardashian has hooked up with sister Kourtney Kardashian's new boyfriend, Travis Barker. Barker and the 42-year-old businesswoman Kourtney began dating in January and have immediately gotten serious making their affection for one another official in ink. 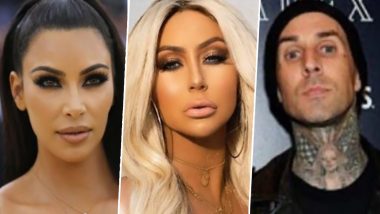 "I was 'bffs' with Kim Kardashian during a fourth [of July]. She was hooking up with Travis Barker and we were at his house.. he was truly dope," the 37-year-old artist O'Day wrote on her Instagram Story in July 2020 (via Perez Hilton) without determining the year the relations supposedly happened. "Shanna his ex (who I love) apparently was taking steps to cut [Kim's] tires (sorry girl but that was funny s**t, I would have too) so they requested that she leave her vehicle elsewhere," the star continued. Kourtney Kardashian's Relationship With Travis Barker Makes Scott Disick 'Uncomfortable'.

"We took off and went to some bs celeb Malibu parties where [Kim] wanted to be photographed, and I needed to run around the house after house in an uncomfortable dress and high heels to appease that. She got all her photos with celebrities accomplished and we headed back to Calabasas," the star added. The 'Show Stopper' songstress proceeded to detail some drama with Kim, writing, "I was really irritated that we needed to do all of that since I totally LOVE firecrackers and I have consistently been in essential spots watching them every year."

"Because we had to chase clout extra hard we got on [the] freeway late and wound up in her Range Rover as the firecrackers began," added O'Day. "I obviously would never tell her I was annoyed AF, because you're not allowed to if you want to be 'bffs' with her. So I asked her if she could pull off the road so we could get out and just experience (SOMETHING REAL) the fireworks. And she did. And we sat on this plot of grass watching them and all I remember feeling is relieved to see the beauty of them," O'Day further said.

The 'Second Call' crooner concluded her post, "And she turned to me and said: you know last year on the fourth I was on a yacht with Paris Hilton in the middle of some remote beautiful place ... and this year I'm sitting on a plot of grass in Calabasas with you.' Hahahaha. I was like, oh.. cool." In spite of O'Day and Moakler's claims, a source close to Kim revealed to Page Six on Monday that the 40-year-old 'Keeping Up With the Kardashians' star didn't engage in extramarital relations with Barker.

The source insisted, "Travis and Kim have never had a heartfelt relationship. They were friends who also how Kourtney and Travis were introduced." Barker and the 42-year-old businesswoman Kourtney began dating in January and have immediately gotten serious making their affection for one another official in ink. Meanwhile, Kim married Kanye West in 2014. She filed for divorce from the rapper in February.