Benedict Cumberbatch, Courteney Cox and Zac Efron Among 35 Celebs to Be Honoured in Hollywood Walk of Fame 2021

International stars Benedict Cumberbatch, Courteney Cox and Zac Efron among others have been selected to receive a star on the Hollywood Walk of Fame in 2021. 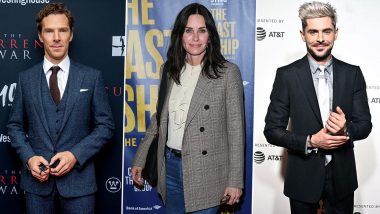 Naomi Watts , Ryan O'Neal and Ali MacGraw will also be honoured with a star on the Walk of Fame. But Ryan and Ali will get a double star. In the House: Katy Perry, John Legend to Host a 3 Days Star-Studded Virtual House Party

The rock band Jefferson Airplane, soul quartet The Chi-Lites and hip-hop group Salt-N-Pepa are also being inducted. The date of the ceremony has not been revealed yet.

(The above story first appeared on LatestLY on Jun 19, 2020 04:17 PM IST. For more news and updates on politics, world, sports, entertainment and lifestyle, log on to our website latestly.com).