Chris Hemsworth is about to get even more popular in India. His Dhaka co-star Rudraksh Jaiswal got him to say a Shah Rukh Khan dialogue from Dilwale Dulhania Le Jayenge. 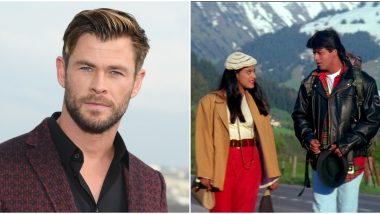 Chris Hemsworth is about to get even more popular in India. The actor is extremely loved in the country, thanks to his performance as Thor in the Marvel Cinematic Universe. Now, he has said one of the most iconic dialogues in Bollywood. Fans are going to be impressed. The actor was recently in India to shoot for the Netflix original film, Dhaka, which is being produced by Avengers: Endgame directors Russo Brothers. Chris will be co-starring with Randeep Hood and Pankaj Tripathi. One of his Indian co-stars was a kid, Rudhraksh Jaiswal. Chris Hemsworth Denies Using Drinking Water to Tend to His Garden During Australia Drought, Slams Media House.

And the credit for making Chris say a Hindi dialogue goes to him. He got the Thor actor to say the popular dialogue from Dilwale Dulhania Le Jayenge. Shah Rukh Khan's Raj told Kajol's Simran, "Bade bade deshon mein choti choti baatein hoti rehti hain." And, of course, fans all over India loved it. The movie is still running in a theatre after 24 years. Avengers Endgame Star Chris Hemsworth Gets ‘Embarrassed’ When Wife Elsa Pataky Is Right.

Check Out The Video of Chris Hemsworth Talking Like Raj Here:

And guys there you have it @chrishemsworth saying an Hindi dialogue🤪🤪it is actually better than his Spanish. This is so cool guys......🥳🥳🥳🤩🥰 loves his dialogue delivery and his smile. He just killed it....🤪🤪🤪😍😇 love you sir!!!! Listen to it carefully😋😋😋😋🥰😍 #performance#hindi#india#life#dialogue#live#missyou

This is not the first time Chris has attempted to do the Bollywood style dialoguebaazi. Our very own Siddhant Chaturvedi interviewed Chris as part of promoting Men in Black: International. Sidhant got Chris to translate a few Bollywood dialogues in English.

There has been no update about when Dhaka will start streaming on Netflix, but we are eagerly looking forward to this actioner. The movie has been directed by Sam Hargrave, a debut venture for him.

(The above story first appeared on LatestLY on Dec 24, 2019 06:20 PM IST. For more news and updates on politics, world, sports, entertainment and lifestyle, log on to our website latestly.com).