Don't Look Up tells the story of two low-level astronomers, who must go on a giant media tour to warn mankind of an approaching comet that will destroy earth. The film features a stellar cast of Jennifer Lawrence, Leonardo DiCaprio, Meryl Streep, Jonah Hill and Timothee Chalamet. It will start streaming on Netflix on December 24. 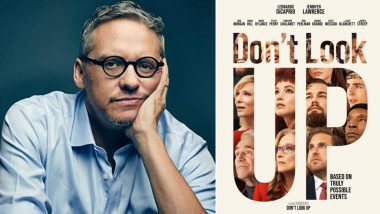 Filmmaker Adam McKay, who is gearing up for the release of his satirical science fiction comedy 'Don't Look Up', says a few drafts of the movie weren't comedic to start with. Talking about the film, McKay said: "Surprisingly, the first few drafts of 'Don't Look Up' weren't comedic! I played with the idea at first of making a straightforward drama or a small, intimate character study, but at a certain point I knew I needed to make a comedy, because I felt like after these last few years, we really, really needed to laugh." Don’t Look Up Trailer: Leonardo DiCaprio, Jennifer Lawrence Are on a Mission to Save the World; Film to Arrive on Netflix on December 24 (Watch Video).

He added: "I'd say the one thing that comedy has to have in order to work in the way you describe is - you need some kind of distance and perspective. You can't laugh about a monkey if you're currently being attacked by one, right? But back up 300 feet and watch a monkey behave for a while and you're probably going to laugh or smile. "So, in writing this movie, and eventually making it after a pause, there was this sense of everyone collectively exhaling in relief that we could finally laugh after the insanity of the last 2 (or 20) years." Don’t Look Up: Leonardo DiCaprio, Jennifer Lawrence’s Film Gets an Official Twitter Emoji.

Sharing his inspiration for the film, the filmmaker said that for a funny movie, the origins are pretty serious. "I read a book in 2019 called 'The Uninhabitable Earth' that I couldn't get out of my head. It depicts the ways in which global warming will wreak havoc on the planet if nothing is done to combat the climate crisis. And, it all boiled down to this idea I just couldn't shake: We all know how to react when there is a killer with an ax, or when your house is on fire, but what the author David Wallace-Wells was writing about was a million times worse."

"How do we get people to realise this is a clear and present danger? How close does that danger have to be for us to have the proper response? I felt like I needed to write this script." He added that then over the course of the next few weeks, this great little analogy kept popping up in all his conversations, including one with David Sirota, a journalist he has known for years.

"It's like a comet is going to hit Earth and no one cares. And at one point, I said, 'That's it. That's the movie.' Sometimes it's as simple as that. I knew the movie needed to be laugh-out-loud funny, not just clever or wry, so, I turned to the all-time greats. Comedies like 'Office Space' and 'Idiocracy' that really capture the way we live in the modern world. (Both of those Mike Judge films were north stars for me.)

"But also movies like 'Dr Strangelove', 'Network', and 'Wag the Dog'. I've always been intrigued with the idea of finding a way to encapsulate these giant looming threats that we're faced with in this world, but to show it in a way that has a bit of fun with it." Netflix's upcoming satirical science fiction black comedy 'Don't Look Up' tells the story of two low-level astronomers, who must go on a giant media tour to warn mankind of an approaching comet that will destroy earth. The film features a stellar cast of Jennifer Lawrence, Leonardo DiCaprio, Meryl Streep, Jonah Hill and Timothee Chalamet. It will start streaming on Netflix on December 24.

(The above story first appeared on LatestLY on Dec 15, 2021 03:11 PM IST. For more news and updates on politics, world, sports, entertainment and lifestyle, log on to our website latestly.com).