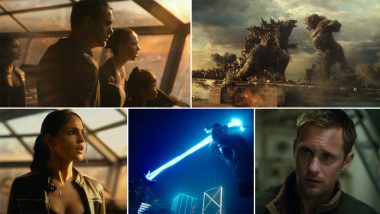 We don't know how good a movie Godzilla vs Kong would be, but we definitely are so very excited to see two of the biggest monsters take on each other! Adam Wingard's Godzilla vs Kong sees a delayed release thanks to reshoots and and the pandemic, but it has kept the fanboys excited to see the titans clash on the big screen. And with the first trailer out, we have to say we are not sure whom to side with - though the promo was a little inclined towards the ruler of Skull Island, King Kong. Godzilla Vs Kong Gets A New Release Date! Adam Wingard’s Film Preponed To March 26, 2021.

However, while the size is right, Kong doesn't have the nuke power that Godzilla possesses and hence has to rely on his brawn power and brains to deflect Godzilla's atomic breath. The trailer seems to pose Godzilla as the antagonist, as Kyle Chandler's returning human character tells us, he is now hurting people and they don't know why (could the crimes be done by another Titan, say Mechagodzilla?). How the humans bring Kong from his kingdom to fight Godzilla. We also get glimpses of the other Titans, though it is also mentioned that only Kong and Godzilla are the last ones left. What happened there? The Matrix 4, Godzilla vs Kong, The Suicide Squad And Others, Warner Bros. Pictures To Release Their 2021 Biggies in Both Theatres and HBO Max (Watch Video).

(The above story first appeared on LatestLY on Jan 24, 2021 11:40 PM IST. For more news and updates on politics, world, sports, entertainment and lifestyle, log on to our website latestly.com).