Halloween 2021: From Malignant to Saint Maud, Best Horror Films of 2021 Available in India on OTT (and Where to Watch Them Online)

With Halloween of course people are in the mood to experience a lot of scary stuff, and what better way to experience it in the form of movies. 2021 has had some really great horror releases throughout the year 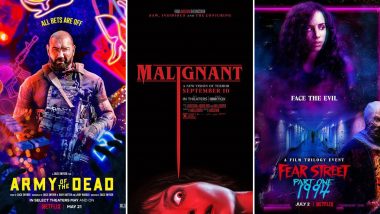 Halloween is perhaps one of the most exciting time of the year. A season filled with scary shenanigans and celebrating the genre of horror, Halloween is really fun. From people dressing up and roaming around as some of their favorite characters in pop culture to children going door to door asking for candy with the streets having a horror theme to them, this festival is a spooky treat. From Candyman to Halloween Kills, 7 Horror Movies You Should Keep an Eye Out for in 2021.

With Halloween of course people are in the mood to experience a lot of scary stuff, and what better way to experience it in the form of movies. 2021 has had some really great horror releases throughout the year. Malignant to Army of the Dead, each and every release has had something really unique to offer. So let's take a look at five of the best horror films to watch during Halloween season.

The Unholy follows Jeffrey Dean Morgan as a disgraced journalist who tries to resurrect his career after stumbling upon a series of divine miracles. This leads to a bunch of misfortunes and so begins the story. The Unholy has some really great and fun thrills and will leave you immensely entertained.

(Available to watch on BMS Stream)

Netflix had one of the biggest surprises with horror this year. With the Fear Street Trilogy, Netflix delivered a new film every week. Each film focused on the town of Shadyside and the horror mishaps taking place over different time periods, stitching all the stories rather well.

A horror film about a hospice nurse who believes that she must have one of her patient's souls is honestly perfect for Halloween. Saint Maud features some really strong performances and great thrills and you should definitely check it out.

(Available to watch on BMS Stream)

Army of the Dead

Zack Snyder returned to form and went back to his roots with Army of the Dead. Following a Zombie Apocalypse in Las Vegas, a group of thieves are sent into the city to go and steal some money buried in a casino. It's a great horror action adventure that will definitely leave you satisfied. Army of the Dead Movie Review: Zack Snyder Delivers a Flawed but Fun Zombie Flick, Starring Dave Bautista and Huma Qureshi (LatestLY Exclusive).

James Wan's first film since 2018, Malignant was a trip. Featuring a woman who has visions of people getting murdered only to realise they are happening in real life, Malignant is one of the weirdest and the most original horror film I have seen in a while. This is my favorite horror flick from this year and please do yourself a favor and watch it.

(The above story first appeared on LatestLY on Oct 30, 2021 05:34 PM IST. For more news and updates on politics, world, sports, entertainment and lifestyle, log on to our website latestly.com).