Harvey Weinstein Sentencing: Kristin Davis, Jameela Jamil and Other Celebs React, Call It a Historic Victory For All Women 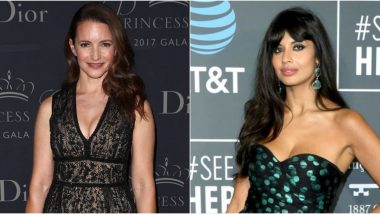 Harvey Weinstein was sentenced to 23 years in prison Wednesday, March 11. The disgraced movie mogul has been convicted on third-degree rape and a first-degree criminal sexual act. It is certainly a landmark judgement and a big win for the MeToo movement. After Weinstein's sentencing, The Silence Breakers, a group of two dozen of Weinstein’s accusers that includes Ashley Judd, Rosanna Arquette and Rose McGowan, issued a statement that said that “Harvey Weinstein’s legacy will always be that he’s a convicted rapist. He is going to jail – but no amount of jail time will repair the lives he ruined, the careers he destroyed, or the damage he has caused."Harvey Weinstein Sentenced to 23 Years in Jail for Rape, Sexual Assault.

Among other reactions, Tina Tchen, the president and CEO of the Time’s Up Foundation also reacted to the judgement and said, “the trauma of sexual assault and harassment is lifelong — we can only hope that today’s sentence brings all of the survivors of Harvey Weinstein some measure of peace."

Celebrities such as Padma Lakshmi,  Jameela Jamil among others also expressed their views on social media. Mira Sorvino, who accused Weinstein of sexual harassment, wrote, “23 years. Harvey Weinstein has been sentenced to 23 years in prison for his crimes of rape and sexual assault. I literally cried tears of amazement, gratitude that the justice system has worked on behalf of all of his victims today.” Check out the tweets here. Harvey Weinstein Gets Jailed For 23 Years In Rape and Sexual Assault Case, Netizens Hail #MeToo Movement.

23 YEARS!! Justice has been served today. So thankful for all of the incredible survivors who shared their experiences at the hands of this monster. https://t.co/E6t1A5vc3X

This was only possible because of the many courageous women that came forward and spoke-out against this monster.

Harvey Weinstein sentenced to 23 years in jail! Congratulations to the incredible women who took this monster on, in spite of how maliciously he retaliated. You have made a huge leap forward for all women with this victory. Also so much love to @RonanFarrow ❤️

Today history was made.

This would not have happened if it weren’t for all the courageous women that risked everything to come forward and speak their truth. Thank… https://t.co/NUtzcTjEF3

More reactions are expected given that this is such a big moment for sexual abuse survivors who came forward against Weinstein and also those who drew courage from this case.

(The above story first appeared on LatestLY on Mar 11, 2020 10:58 PM IST. For more news and updates on politics, world, sports, entertainment and lifestyle, log on to our website latestly.com).