Beware of Googling Kim Kardashian, Naomi Campbell, Kourtney Kardashian and Ruby Rose's names online for you might become a target of cybercrime! 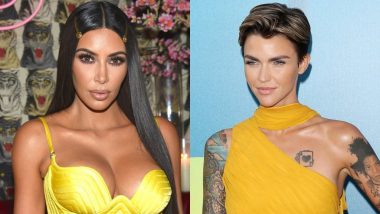 Beware of Googling Kim Kardashian, Naomi Campbell, Kourtney Kardashian and Ruby Rose's names online for you might become a target of cybercrime! As per a report shared by the cybersecurity company, McAfee, Kim K's the top most dangerous search online in the UK! People have been Googling her name to find out more details about her life and to keep up with the Kardashians. But it could turn problematic for your computer or other devices through which you're browsing.

McAfee also stated that the most searched names of celebrities had a plethora of potentially malicious site links and malware activities that would down the computer's performance and make it more vulnerable to hackers and cybercrime.

While Kim Kardashian's name was the topmost dangerous names to be searched in the UK, Orange Is The New Black actress Ruby Rose has topped the charts to be the most dangerous names to be searched in the list released in the US. Other celebrities involved in the UK list are Rose Byrne, Love Island contestant Kem Cetinay, Britney Spears, actress Emma Roberts and reality star Ferne McCann. On the same, McAfee's chief scientist Raj Samani stated, "fast-paced world that's heavily influenced by pop culture and social media".

He further added, "There are endless opportunities to pick and choose which entertainment options we prefer to enjoy from a variety of connected devices. With Kim Kardashian's influence and business ventures, people will go to extreme lengths to be a little more like Kim." The site of McAfee further dictated methods to curb the growing issue of cybercrime.

(The above story first appeared on LatestLY on Oct 03, 2018 02:55 PM IST. For more news and updates on politics, world, sports, entertainment and lifestyle, log on to our website latestly.com).