Oscars 2021: Daniel Kaluuya's Reply To A Journalist For Mistaking Him For Odom Jr Is Going Viral; The Journalist Refutes The Claim Though

Daniel Kaluuya picked up the Best Supporting Actor's trophy at the Oscars 2021 for Judas And The black Messiah. But a journalist mistook him for Odom Jr from One Night At Miami. The video went viral and the journalist had to explain her side of the story. She categorically asserted that she didn't mistake one for the other. 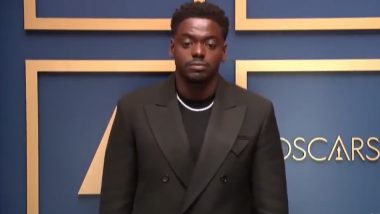 Daniel Kaluuya won the Best Supporting Actor trophy at the 93rd Academy Awards yesterday for Judas And The Black Messiah. Oscars this year have been called the most diverse ever starting from the nominee list to the winners. It saw many historic wins and Kaluuya was part of it. But despite having such an evolved ceremony for the first time in its history, it did get plagued by instances of misbehaviour. After picking his award, Daniel addressed the media and took their questions. A certain member of the Hollywood Foreign Press mistook him for Odom Jr and asked him how it was being directed by Regina King. The latter had directed Odom in One Night In Miami. Oscars 2021: Daniel Kaluuya Thanks His Parents for Having Sex in His Acceptance Speech, Actor’s Mother Reaction Goes Viral (Watch Video)

The video has gone viral which made the journalist issue an explanation on Twitter. She wrote, '#DanielKaluuya I did not mistake you for Leslie Odom Jnr. I’m sorry if it seemed that way. I had wanted to ask about Regina King not being nominated as a director for One Night in Miami, and your win for Judas and the Black Messiah for the community at this time.” But the users weren't satisfied with it and pointed out more flaws. She explained some more. Daniel Kaluuya’s Hilarious Saturday Night Live Act Wins the Internet, Actor Takes a Dig at the British Royal Family – WATCH

First, check out the video...

Daniel Kaluuya responds to a journalist who mistook him for Leslie Odom Jr. at the #Oscars and asked him: “What was it like being directed by Regina [King]?”

#DanielKaluuya I did not mistake you for Leslie Odom Jnr. I'm sorry if it seemed that way. I had wanted to ask about Regina King not being nominated as a director for One Night in Miami, and your win for Judas and the Black Messiah for the community at this time.

2. (cont) #DanielKaluuya There was a sound issue so I dropped the part about Regina King and restated my question. What does it mean for the community at this time. When I listed to the audio, I do understand, but there was no confusion.

Last heard, Gardiner told The Cut that she has “reached out to a DEI counselor” for guidance.

(The above story first appeared on LatestLY on Apr 27, 2021 12:13 PM IST. For more news and updates on politics, world, sports, entertainment and lifestyle, log on to our website latestly.com).