Oscars 2021: Nomadland, MANK or Minari – Predicting the Winner in Every Major Category of the 93rd Academy Awards!

With films like Nomadland, MANK, Minari and Sound of Metal dominating the nominations it’s kind of hard to decide as to who will bag the awards since all of them are amazing. So here are our predictions for every major category for the 93rd Academy Awards. 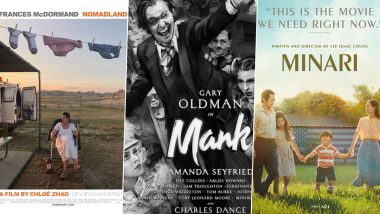 The 93rd Academy Awards is happening on April 26, 2021, at the Dolby Theatre in Los Angeles. In what’s been a really dry year for movies due to the COVID-19 pandemic, there were still a couple of really great gems that entertained us, spoke to us, and were really special. This year’s nominees are really diverse and well deserved in my opinion and it’s amazing to see that after such a hard year for everyone we can still look forward to this one night where we can celebrate this great artform. Oscars 2021 Live Streaming, Date & Time: Here’s When and Where to Watch the 93rd Academy Awards Online.

With films like Nomadland, MANK, Minari and Sound of Metal dominating the nominations it’s kind of hard to decide as to who will bag the awards since all of them are amazing. So here are our predictions for every major category for the 93rd Academy Awards. Oscars 2021: From Nomadland to Sound of Metal, Ranking 93rd Academy Awards Best Picture Nominees As Per IMDB Rating (LatestLY Exclusive).

Maria Bakalova was surely a surprise last year considering this was her first major film and was relatively an unknown actress. Being a highlight of the movie, she showcased great comedic timing and was just stealing every scene she was in.

I thought the costume design in Mank was amazing and reflected that time era perfectly. It helped in making the movie seem accurate to the time period and everyone just looked amazing.

I think this is an easy win for Sound of Metal considering how amazingly it depicts what a deaf person feels like. Especially the scenes where Riz Ahmed’s character gets the implants put into his ears and you start hearing the distortion of sound was done amazingly well.

The soundtrack over here done by Trent Reznor and Atticus Ross is a joy to listen to. A film that depicts jazz so beautifully, Reznor and Ross’s signature style of music compliments it wonderfully and goes great with the dramatic scenes in the movie. Oscars 2021: Priyanka Chopra Announces Best Adapted Screenplay Nomination for Ramin Bahrani’s The White Tiger!

Over the years Daniel Kaluuya has proved himself to be an amazing actor and in Judas and the Black Messiah he gives another great performance that’s full of heart. Although if not him I would love to see Paul Raci win as well since his performance was also relly good in Sound of Metal

This documentary about a friendship between Craig Foster and an Octopus was a highlight of the year. It’s really emotional and helps in education one about these amazing animals.

The Man Who Sold His Skin

Predicted Winner: Another Round

This film from Denmark led by Mads Mikkelsen is an amazing film and surely has it in the bag since it’s been an awards darling for a while.

Being a Christopher Nolan film it’s bound to have some really huge sets. The sets in this movie are grand and really set the tone for the spectacle that we are about to witness. Especially the opening in the opera house is so great that it sets in the expectation for what we are about to see and makes Tenet feel epic.

I think Nomadland has this under the bag because it’s the editing that makes it story work so much better. Every scene is cut really well and it helps in a smooth movement of the story.

Another award that I think Nomadland deserves, every scene is framed beautifully and looks like a painting. With scenic shots of the countryside and the mountains, you could pause at any moment and you would have found a new wallpaper.

The One and only Ivan

The film by visual standards is a marvelous achievement. Opting for minimal CGI, Nolan is rather interested in pushing the boundaries with practical effects and Tenet is a master-class in that.

Everybody in Mank look as accurate to the time period its set in, although I can see Ma Rainey’s Black Bottom winning this as well.

A Shaun the Sheep Movie: Farmageddon

While I would love to see Soul win, I think Wolfwalkers deserves it more. Its art style and storyline are so amazing that it’s a joy to watch it. Its wholesome, emotional and gives a really great message by the end of it.

Speak Now by Leslie Odom Jr. from One Night in Miami can definitely win this but can’t rule out Husavik as well.

One Night in Miami…

While I think Borat Subsequent Moviefilm can win over here, Nomadland just has a better chance of winning.

While can’t rule out Sound of Metal, Minari in my opinion just has a better screenplay in general because of how well it showcases the Korean culture.

Best Actor in a Leading Role

Ahmed showed a masterclass of a performance in Sound of Metal as Ruben, someone who is going deaf slowly and has to leave his career as a drummer behind. The range showcased by him is amazing and really helps you in understanding his mindset and what he is going through.

Best Actress in a Leading Role

Vanessa Kirby – Pieces of a Woman

McDormand in Nomadland was spectacular and seeing how she has been an awards darling for a while and deservedly so. I wouldn’t be opposed to Carey Mulligan winning the award as well since she was amazing too.

With Nomadland being an awards darling it’s hard to see how Chloe Zhao doesn’t take this award home.

Out of so many great nominees, it was hard to pick a favorite, but I think Nomadland takes this home. Its showcasing of a Nomad travelling the countryside of America and dealing with her own grief while forming new friendships was just astounding to watch. Although I hope if not Nomadland then maybe Minari shall win.

(The above story first appeared on LatestLY on Apr 25, 2021 03:39 PM IST. For more news and updates on politics, world, sports, entertainment and lifestyle, log on to our website latestly.com).