The Bad Guys Movie Review: Sam Rockwell, Awkwafina’s Animated Film is a Familiar Tale with a Roguish Charm to It! (LatestLY Exclusive)

The Bad Guys is an animated film directed by Pierre Perifel and releases in theatres on May 20, 2022. It stars Sam Rockwell, Awkwafina, Craig Robinson, Anthony Ramos and Marc Maron. 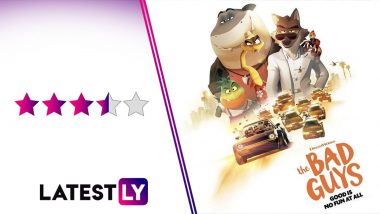 The Bad Guy Movie Review: Every once in a while, there comes an animated film that just exudes style and charm through its visuals. We have been seeing this happen with films like Kubo and the Two Strings and the highly acclaimed Spider-Man: Into the Spider-Verse. These two films pushed the limits of animations to its absolute, and delivered a product that was deeply satisfying. The Bad Guys in the same way is somewhat like that, even though its storytelling at times can be quite a miss. The Bad Guys Trailer: Sam Rockwell, Anthony Ramos, Awkwafina Lend Voice to Quirky Animated Characters Behind the Biggest Heist (Watch Video).

Directed by Pierre Perifel and written by Etan Cohen, The Bad Guys is based on a children’s graphic novel of the same name. It follows a group of criminal animals called the Bad Guys, who after being caught, try to be the “good guys”, only for their leader, Wolf (Sam Rockwell), to realise that he actually wants to be good and change his ways. 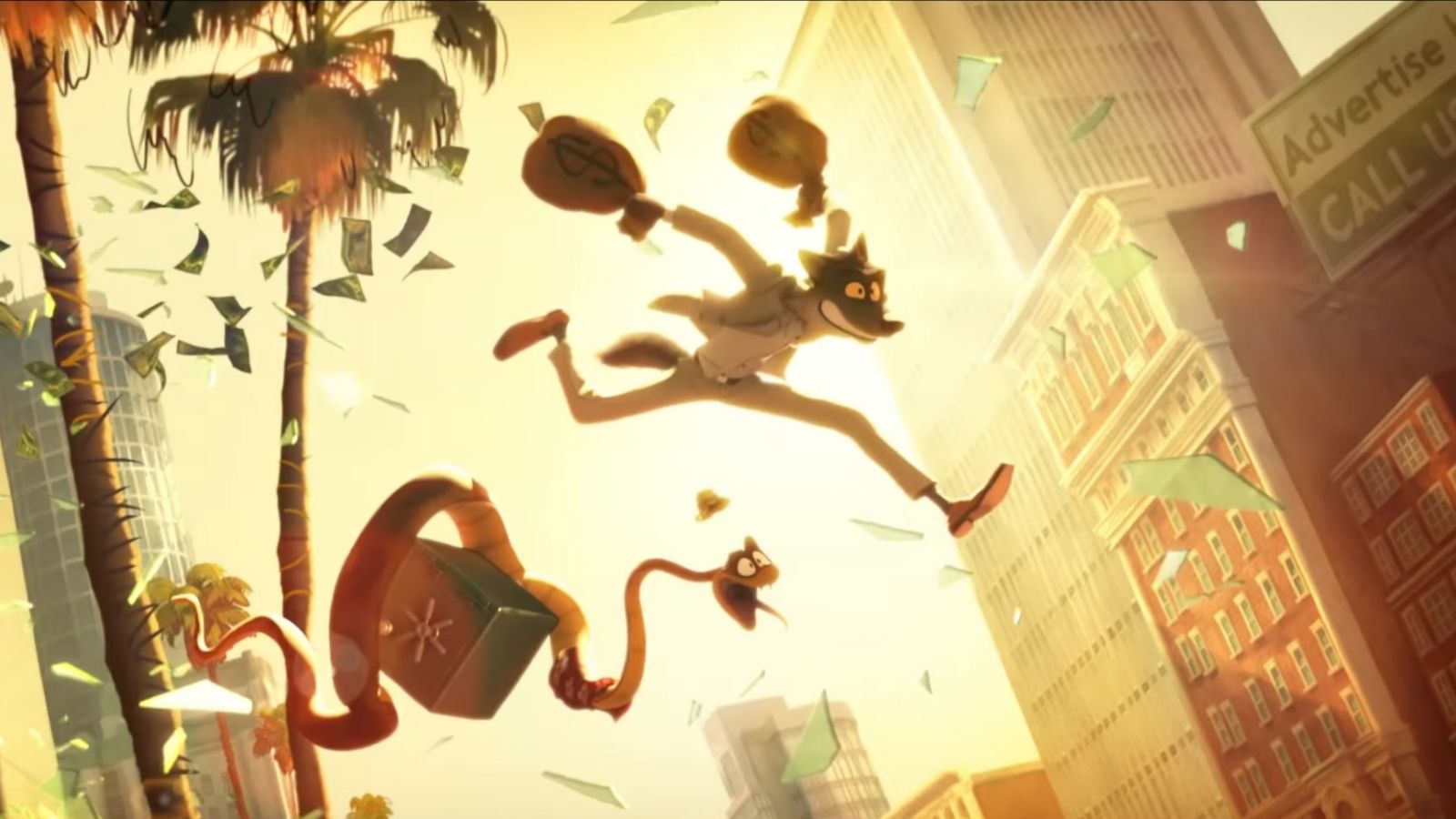 Featuring a great opening that sees Wolf and his companion Snake (Marc Maron) rob a bank, one thing is immediately clear that the film isn’t just concerned with its art-style, but the camera work as well. You are treated to a great tracking shot that quickly devolves into a car chase where each and every member of the gang is introduced.

The opening does a fairly good job at showcasing all of their specialities. Tarantula (Awkwafina) is great at hacking, Shark (Craig Robinson) is a master of disguises while Piranha (Anthony Ramos) is the muscle of the group. This all leads to a really fun opening that sets up this roguish tale, that moves at kinetic speed for the better and worse.

The pacing of the movie is fast. Scenes move at a rapid pace as there is something constantly happening in the story. Never once did it feel like there was a filler moment in The Bad Guys, rather every scene kept moving the plot constantly. Although, in the middle of the film where a couple of reveals took place, I wish it could have slowed down a bit. Since not a lot of breathing room is given to them.

Talking about the reveals themselves, the film can run into the problems of being trapped in the cliches of its genre at times. The Bad Guys explores the concepts of villains turning good, and that has been done before quite a lot. Although thankfully, the story is still kept interesting due to the amazing voicework done by the actors here.

Sam Rockwell is an immediate standout as Wolf. He is charming, has that roguish personality to him, and all-in-all is a great lead. The side characters make for a great surprise too as Awkwafina and Anthony Ramos knock it out of the park. Especially Ramos with his comedic timing as he delivers some of the best laughs in the films. In the same way, Craig Robinson and Marc Maron prove themselves to be worthy members of the team. 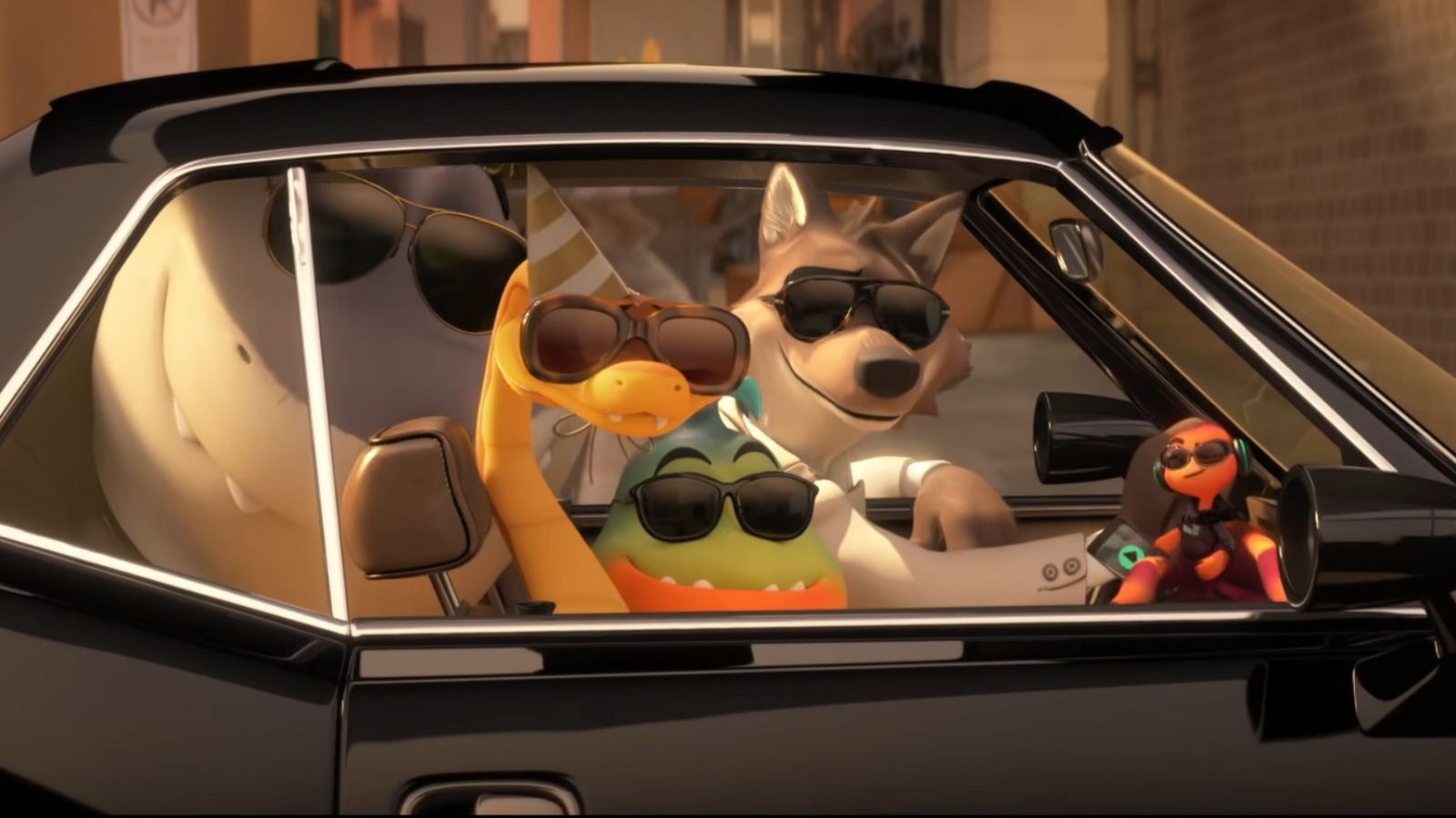 Talking about characters outside of the Bad Guys are Marmalade (Richard Ayoade) and Diane Foxington (Zazie Beetz), who provide for some great dynamic with our main leads here. All-in-all it's some great work here even though some of the characters themselves can feel thin in their characterisation.

The story does hold some many meaningful themes to it. While on the surface it may look like a children’s film, there are themes of redemption present here. Some scenes and dialogues definitely aim towards more of an older crowd, which just makes this so much more accessible. Sure, there is a level of goofiness here that the kids will enjoy, but at the same time there is some maturity present too.

The Bad Guys packs many hilarious punches as well that sees the animals utilise their uniqueness to their advantage. For example, one gag involved Snake shedding his skin just to reveal that he had an entire outfit under it. Although it is still not above a fart joke, which just makes it all the more baffling that they were included, considering the notch humour here. Doctor Strange in the Multiverse of Madness Movie Review: Benedict Cumberbatch’s Marvel Film Revels in Sam Raimi’s Horror Vibes and Elizabeth Olsen’s Scarlet Witch Act (LatestLY Exclusive).

Although, the actual star of the show here is the animation. Dreamworks has done some really great work here that combines 2D and 3D together to bring some interesting visuals. While it's not done on the level of Spider-Man: Into the Spider-Verse, it still has enough flair to it that it stands on its own in the current era of hyper-realistic Disney animated films.

Story Can Be a Bit Too Fast Paced

Even though its story can let itself down at points with some thin characterisations and fast paced scenes, The Bad Guys still holds its own. It delivers a fun time at the cinemas that both, children and adults can enjoy.

(The above story first appeared on LatestLY on May 20, 2022 11:02 AM IST. For more news and updates on politics, world, sports, entertainment and lifestyle, log on to our website latestly.com).