Tom Hardy Does it Again, Drops a Hint About Spider-Man vs Venom Face-Off and Deletes it Later (View Pic)

There are rumours that Tom Holland's Spider-Man will make an appearance in Tom Hardy's upcoming sequel, Venom: Let There be Carnage. 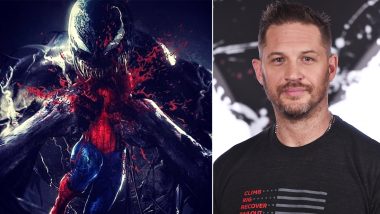 Tom Hardy sure knows how to play with the minds of spider-man fans. The actor who's gearing up for his second outing as Venom took to his Instagram account to share a picture of his symbiote killing your friendly neighbourhood spider-man. Yes, obviously he deleted the picture soon after but fans were quick enough to get a screenshot of his tease. There are reports that Holland's superhero character will make an appearance in Venom sequel but an official confirmation about the same is awaited. Tom Hardy's Venom 2 Gets a Director; Andy Serkis Roped in to Direct this Big Sequel.

This is not the first time when Hardy has teased about a Spider-Man v/s Venom face-off. Earlier when the title of his sequel, Let There be Carnage was revealed, the actor had shared a Venom-spidey still to drop a hint about their possible faceoff in the upcoming sequel. Fans are obviously waiting for Holland and Hardy to come face-to-face considering we have already seen what a Venom and Spider-Man fight would look like (Tobey Maguire's Spider-Man 3). The anticipation for the same is already touching the sky and if all goes well, we might see Holland's friendly cameo in Venom 2.

The sequel was earlier slated to hit the screens in October 2020 but due to ongoing coronavirus pandemic, its release was pushed ahead by eight months. Hardy's sequel will now hit the screens on June 25, 2021. Woody Harrelson's Carnage will be the main antagonist but we are still excited about Spider-Man's potential cameo.

(The above story first appeared on LatestLY on May 04, 2020 10:22 AM IST. For more news and updates on politics, world, sports, entertainment and lifestyle, log on to our website latestly.com).