Vince Vaughn Birthday: Hacksaw Ridge to Fighting With My Family - Here's a Look At the Best Roles Of the American Actor 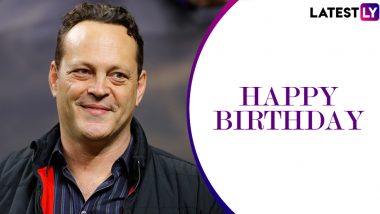 Vince Vaughn is one of those American actors who is popular for his comedic timing in fun, easy-breezy films. The actor began his career in the late 1980s. He first appeared in minor television roles later attained wider recognition with the 1996 comedy-drama film Swingers, that truly made everyone take notice of him. Vaughn has been a part of several light-hearted comedy films such as Wedding Crashers, Old School, Dodgeball - A True Underdog Story among others. Many loved him for his comedic roles such as Wes Mantooth from Anchorman - The Legend of Ron Burgundy. Vince Vaughn Faces Backlash After Being Spotted with Trump.

As the actor celebrates his birthday on March 28 and turns 50, we look at some of his best films. Vaughn has also played some iconic characters on Television. In 2015, he starred as Frank Semyon in the second season of the HBO anthology crime drama television series True Detective alongside Colin Farrell, Taylor Kitsch and Rachel McAdams. Here's looking at some of his best roles.

While not many considered Vaugh to be good at the serious roles, the actor stunned everyone with his performance in Brawl in Cell Block 99. The film has an above 90% score on Rotten Tomatoes and is considered to be one of the actor's best films. Vaughn plays Bradley Thomas, a retired boxer who returns to his life of crime in the drug gang in this film.

2. Fighting With My Family

Fighting with My Family is based on the 2012 documentary The Wrestlers: Fighting with My Family. Written and directed by Stephen Merchant, the movie stars Florence Pugh as professional wrestler Paige while Vaughn plays Hutch Morgan, a WWE coach and recruiter. The actor received a lot of praises for his role in this film. Year Ender 2019: From Avengers Endgame to Knives Out, 11 Hollywood Films That Impressed Us the Most This Year.

This Mel Gibson directorial is based on the 2004 documentary The Conscientious Objector. The film stars Andrew Garfield in lead and starred Vaughn as Sergeant Howell, a bona fide hard ass and something we have rarely seen Vaughn play in his long Hollywood career. The actor truly showed his versatility with this role.

This film paired two of the most amazing men in Hollywood with a great comic timing, Vaughn and Jon Favreau. Written by Jon Favreau, the film stars Vaughn as Trent Walker, a struggling actor who is friends with Mike (Favreau), a struggling and newly-single comedian. The movie is filled with hilarious sequences and is a total must-watch if you love both these actors.

While Vaughn has starred in several other films including The Break Up with Jennifer Aniston and several others, these remain some of our favourite. If you have any particular Vince Vaughn picks, do let us know in comments!

(The above story first appeared on LatestLY on Mar 28, 2020 09:45 AM IST. For more news and updates on politics, world, sports, entertainment and lifestyle, log on to our website latestly.com).