Check out the trailer of Warner Brothers' Mowgli and get ready to be amazed! 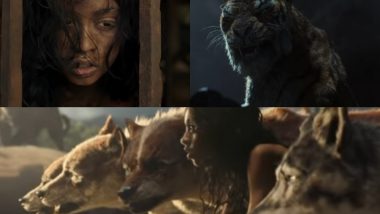 The trailer of Mowgli will give you goosebumps! (Photo Credit: YouTube)

Now this is a version of The Jungle Book that we did not expect but we love it. Mowgli is a much darker version of the story and has such a brilliant cast, I can't even express my excitement. Rohan Chand plays the role of Mowgli in this one, which also has Freida Pinto. The Dark Knight trilogy's Christian Bale has dubbed for Bagheera, Doctor Strange and Sherlock's Benedict Cumberbatch will be the voice of Shere Khan (and he will literally give you the chills), Thor: Ragnarok's Hela played by Cate Blanchett will be Kaa, Naomi Harris will be Nisha, Mowgli's wolf mother and Andy Serkis will be the voice of Baloo.

Now that I've got your attention with the stellar cast, let's talk about the trailer. Mowgli is not going to be one of your kid-centric films. It's dark, edgy and thrilling. Of course, it's got lots of emotions but not one that will not scare your kid. This one promises to be the closest and faithful to the book. Andy Serkis has also directed the movie and a lot of people are calling it a DCEU version of The Jungle Book. I would respectfully disagree with anyone who compares this to The Jungle Book.

Check out the trailer right here.

Tell me you watched the trailer again and again only to hear Benedict say, "My, My, how you have grown!" That totally gave me the chills. Rohan has done a brilliant job at playing the outcast, survivor and legend that Mowgli was. The expectations from this film are so high, it's scary that it might turn out to be disappointing. Mowgli will hit the theaters on 19th October 2018 and we can't wait for these months to pass. What are your thoughts on the trailer? Tell us in the comments below and stay tuned with us for more.

(The above story first appeared on LatestLY on May 22, 2018 09:26 AM IST. For more news and updates on politics, world, sports, entertainment and lifestyle, log on to our website latestly.com).