Ravi Kishan with his romantic avatar has garnered a lot of fan following, and despite him busy with his political work, the actor in him remains a heartthrob. 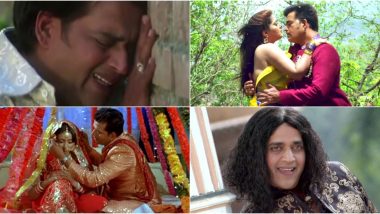 Bhojpuri superstar Ravi Kishan is considered one of the greatest actors of the Bhojpuri film industry with a deep connect to the masses of Hindi hinterland. Due to his immense success featuring in the regional movies, he gradually made a move to Bollywood where despite the limited opportunity, his acting was always revered. An eminent TV personality whose Big Boss appearance back in 2006 still remains fresh in the minds of viewers. Ravi Kishan can be termed as a natural entertainer. After more than three decades in the industry and multiple roles, he can be considered one of the endearing faces of Indian cinema. Bhojpuri Songs and Music Videos With Funniest Lyrics Will Make You Say WTF!

Born as Ravindra Shyamnarayan Shukla on 17th July 1969 in a lower-middle-class family, Ravi Kishan struggled to get into films. Starting with B-grade movies, he climbed up the ladders of success as cinema was the only thing that interested him right from childhood. Today Ravi Kishan is a member of Parliament from Gorakhpur constituency in Uttar Pradesh and a famous BJP face. On his 51st birthday, we take a look at five of his most popular Bhojpuri songs.

This romantic number featuring Ravi Kishan and Madhu Sharma from the movie Yoddha is a hit with the fans for Ravi Kishan’s unique appearance and Pawan Singh magical voice.

The song written by Vinay Bihari Singh and sung by Kalpana and Pappu Ojha is one of the most cherished ones of Ravi Kishan’s career. It was also the main highlight of the 2010 movie Devra Bada Satawela.

Udit Narayan, one of the leading Indian playback singers gave his voice to the song Gora Rang Badaniya, and whenever Udit Narayan sings, the songs most often than not are chartbusters.

Ravi Kishan’s movie Bidaai brought tears to the eyes of his fans and this song, in particular, is extremely emotional and heartbreaking.

His songs have amassed a million of views on YouTube, and for its catchy lyrics and funny dance sequences, and fans still tune into the song despite the passing years. Ravi Kishan with his romantic avatar has garnered a lot of fan following, and despite him busy with his political work, the actor in him remains a heartthrob.

(The above story first appeared on LatestLY on Jul 17, 2020 12:07 PM IST. For more news and updates on politics, world, sports, entertainment and lifestyle, log on to our website latestly.com).