Ray Trailer: Is it Us or Does the BGM Score of Manoj Bajpayee’s Netflix Film Feel Similar to Marvel’s Black Widow?

Seems like Marvel's Black Widow is Bollywood's favourite. As Netflix's Ray trailer's background score sounds very much similar to BW trailer starring Scarlett Johansson. Check it out for yourself. 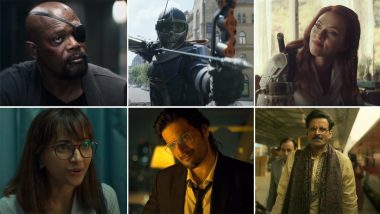 Streaming giant Netflix on June 8 released the trailer of its next original Ray. This one happens to be an anthology that will showcase the works of legendary filmmaker Satyajit Ray. Manoj Bajpayee, Ali Fazal, Harshvarrdhan Kapoor, and Kay Kay Menon are the lead who will tell you tales on ‘ego, revenge, envy, and betrayal’. The trailer opens with a dialogue stating how humans are no less the God as we also have the power to create. Each character plays his part well in the clip and makes you eager for the film. Gangubai Kathiawadi Teaser: Is the BGM Score for Alia Bhatt’s Sanjay Leela Bhansali Film Inspired by Marvel’s Black Widow?

However, seems like even though the trailer does justice to the stories depicted, one tiny detail from the same has left us curious. Well, if you listen carefully to the background score of Ray's trailer, it sounds very much similar to that of Marvel's Black Widow trailer starring Scarlett Johansson. Nah, we ain't kidding.FYI, the tunes are not the exact replica but seem moreover lifted. Ray Trailer: Manoj Bajpayee, Ali Fazal, Kay Kay Menon and Harshvarrdhan Kapoor Present to You Some Gripping Stories That You Don't Want to Miss.

And Here's The OG Music That's Used In Black Widow:

This is not the first time Black Widow's trailer has been picked and used in Bollywood. As earlier, even Sanjay Leela Bhansali's Gangubai Kathiawadi trailer's BGM sounded similar to that of BW. Well, it looks like Scarlett's Black Widow is the ultimate favourite of Bollywood peeps. What do you think? Tell us your answers in the comment section below. Stay tuned!

(The above story first appeared on LatestLY on Jun 08, 2021 07:46 PM IST. For more news and updates on politics, world, sports, entertainment and lifestyle, log on to our website latestly.com).