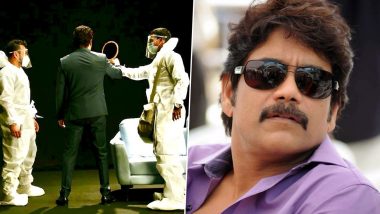 And the shooting for Bigg Boss Telugu's 4th season has officially commenced. It can be recalled that a few weeks back, Star Maa, that telecasts the controversial reality show, had unveiled its rather colourful logo which only amped p fans' excitement. While Bigg Boss Telugu 4 is indeed happening, there is no scoop on how will the season be executed, given social distancing has become the 'new normal', what is confirmed is that season 3's host Nagarjuna Akkineni will be returning to the host's mantle. And confirming the same, Nagarjuna shared pictures of himself from the show's set. Did You Know Nagarjuna Akkineni Charged Rs 5 Crore to Host Bigg Boss Telugu 3?.

He shared photos where he is seen looking dapper in his chosen wardrobe, for what looks like the official promo shoot while makeup artists in full PPE gear were seen helping the actor gear up to face the camera. Bigg Boss 4 Telugu Teaser Out: Here's All You Need to Know About the Next Season of the Akkineni Nagarjuna Hosted Show (Watch Video).

Putting a stamp of confirmation on everyone's suspicions, Sar Maa retweeted the actor's post with #BiggBossTelugu4.

Bigg Boss Telugu 4 marks the return of Akkineni Nagarjuna as the host for the second time. Nagarjuna was roped in as the host for season 3 of the show after season 1 was hosted by Jr NTR and season 2 by Nani. There were also reports of the makers having approached Jr NTR and Mahesh Babu for hosting the fourth season of the reality show but obviously there is no truth to these rumours.

(The above story first appeared on LatestLY on Aug 02, 2020 08:52 AM IST. For more news and updates on politics, world, sports, entertainment and lifestyle, log on to our website latestly.com).