Did Farhan Akhtar and Yash Hint About KGF Chapter 2 Going on Floors? Check Out the Happy Picture of Actor-Producer Duo to Decide Yourself

Are you ready for KGF Chapter 2? 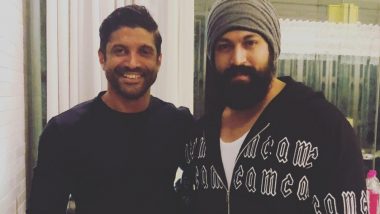 Yash and Srinidhi starrer KGF-Chapter 1 movie was an instant hit. The Kannada film produced by Farhan Akhtar and Ritesh Sidhwani's Excel Entertainment turned out to be the ultimate mass entertainer as the year 2018 ended. The film which is filled with high octane action sequences and power packed dialogues and also item song to the rescue, managed to mint a good amount of cash at the ticket windows nationwide. Now, if we go by the latest Instagram caption posted by Farhan, they might soon start with KGF chapter 2 or must have already started even. Farhan Akhtar Reunites With Rakeysh Omprakash Mehra For Boxer Drama 'Toofan' (Read Deets).

'FarOutAkhtar' shared a happy picture with the star of the film and wrote, "Celebrating the love you all have shown KGF with the rocking @thenameisyash .. here’s looking forward to Chapter 2. #filmhasnoboundaries." Has the film already gone on the floors? Have they started with the prep already or was it just a tease by the producer/actor for the fans, we are yet to know.

Celebrating the love you all have shown KGF with the rocking @thenameisyash .. here’s looking forward to Chapter 2. #filmhasnoboundaries

You will be surprised to know that KGF is the first Kannada film to release in Pakistan. An official earlier was quoted saying by The News Minute, "The film was released on Friday in Pakistan and from the executive producer, we hear that it is running well. They have released the Hindi dubbed version of the movie and it is being received well across several multiplexes in Lahore and Islamabad. We understand it is doing quite well although the distributors have not shared exact box office collection."

Also, the film was competing with Shah Rukh Khan-Anushka Sharma-Katrina Kaif starrer Zero. Despite the amazing experiment done by Aanand L Rai's SRK starrer, KGF enjoyed the stronger response. Well, the second chapter is here and we wait for the announcement.

(The above story first appeared on LatestLY on Jan 23, 2019 10:13 PM IST. For more news and updates on politics, world, sports, entertainment and lifestyle, log on to our website latestly.com).