From Kala to Bheemante Vazhi, 5 Lip-Lock Scenes in Malayalam Cinema of 2021 That Created Quite the Flutter! (Watch Videos)

Circa 2021, the perception has changed for Malayalam Cinema, or it has been deliberately been changed by the new-age actors and directors. The newer generation, barring a few stars, are not averse to kissing scenes. 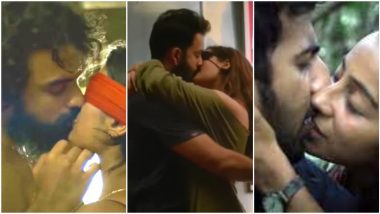 Once upon a time, lip-lock in a Malayalam cinema was considered scandalous. It's not that the yesteryear movies in Mollywood avoided intimacy - after all, the industry is known for heralding the Shakeela era. Some more mainstream Malayalam movies like Vaishali, Njan Gandharvan, Sakshyam, Lanka took some bold steps and had the gumption to show a kissing scene. However, most of Malayalam movies catered to the family audiences and avoided showing lip-locks (though abuses like Pu Monne, item songs and brutal action scenes were okay, strangely). Kiss and Show: From Ina to Theevandi, 10 Bold Lip-Locks in Malayalam Cinema That Were Game-Changers.

Times have changed, though. Actors like Fahadh Faasil, Ramya Nambeesan, Tovino Thomas, Prithviraj Sukumaran, Parvathy, Asif Ali et al have shown a more relaxed stance to kissing scenes, so now quite a few mainstream movies are okay to include one. Senior stars still avoid such scenes, though in 2021, a popular Malayalam lead from the late '90s did break into this exclusive club.

In this special feature, we look at five kissing scenes that rocked Malayalam cinema in 2021.

Tovino had quite a year in 2021, with films like Kala, Kaanekanne, Minnal Murali winning him a lot of appreciation. Kala also earned quite the attention for its visceral action sequences and some bold scenes, including a kissing and lovemaking scene between Tovino and Divya Pillai, that involves borrowed cigarette smoke and a blindfold.

The anthology film features three segments. The one I am talking about here is the final segment, Rani, that is directed by Aashiq Abu. The story features Roshan Mathew and Darshana Rajendran and is about a boy who wants to get intimate with his girlfriend and takes her to a forest spot. The kissing scene between the two stars is quite tastefully done, though what happens after that will leave you quite disturbed. The movie's first segment, Savithri, also features a kissing and lovemaking scene between Samyuktha Menon and Vineeth Vishwam.

Unlike the other kissing scenes in the list, the liplock scene between Saniya Iyappan and Vijilesh Karayad in this thriller isn't sensual or romantic. The kiss happens when the female lead seduces her perverse admirer into submission to kill her adopted family. Krishnankutty Pani Thudangi Movie Review: Saniya Iyappan, Vishnu Unnikrishnan’s Gripping Mystery-Thriller Is Enhanced by Its Spooky Sound Design.

The remake of the Hindi thriller Andhadhun also borrows the kissing scene from the film, here picturised on Prithviraj and Raashi Khanna. It was quit sensuous scene with the red-hot chemistry between the actors.

Sure, many would have been shocked to see Kunchacko Boban, the quintessential chocolate boy of Malayalam cinema for years, break the unspoken barrier with his kissing scene with actress Megha Thomas. You can say the Aniyathipravu boy is living upto the times.

(The above story first appeared on LatestLY on Jan 17, 2022 09:13 PM IST. For more news and updates on politics, world, sports, entertainment and lifestyle, log on to our website latestly.com).