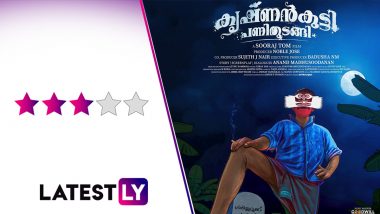 Krishnankutty Pani Thudangi Movie Review: On Twitter, someone pointed out that Malayalam Cinema have been churning out thrillers after thrillers, and needs to give other genres a chance. I don't think it is a valid criticism, considering that we have films like Saajan Bakery..., Tsunami, Aarkariyam, The Great Indian Kitchen, Aanum Pennum also releasing in the past few weeks. That said, here's me reviewing yet another thriller from Malayalam Cinema, Krishnankutty Pani Thudangi. Joji Movie Review: Fahadh Faasil Brings Another Shade of Grey to Dileesh Pothan’s Macbethian Tale of Greed.

Directed by Sooraj Tom, Krishnankutty Pani Thudangi is a mystery thriller with some spooky elements, that metamorphoses into a revenge saga in the third act. Unnikrishnan (Vishnu Unnikrishnan) goes to a secluded villa in the middle of nowhere as a caretaker for its paralysed owner. He finds that only two people live in the house - the patient and his granddaughter Beatrice (Saniya Iyappan).

The girl claims that her parents (who hired him) are out of town and despite her remonstrations, he barges in to stay there. Unnikrishnan takes a fancy for the girl and begins to act creepy towards her. Soon, however, he realises his intrusion was a mistake as neither the house nor the girl are as innocuous as they seem. Unnikrishnan now sees ahead a hellish of a long night that could also be his last.

While the focus is on the strange and eerie events that happen to Unnikrishnan, there is also the urban legend of 'Krishnankutty', a phantom serial killer who is believed to have terrorised Unnikrishnan's village. Whether this subplot matters to the main narrative or not is another matter - that can't be discussed without being SPOILERish - but it adds a lot of intrigue to the plot.

Before I discuss how the movie fares out to be, let me have some good words to share about the technical aspects of Krishnankutty Pani Thudangi. The best part of the film is its fantastic sound design by Justin Jose, creeping you out at every turn. Jithu Damodar Palakkad's camerawork helps in enhancing the set-design turning the villa into a spooky maze that traps its hapless protagonist.

As for the film itself, Krishnankutty Pani Thudangi is a terse watch through most of its duration. While the film is not frightening in itself - I didn't find any good scares -  it revs up the underlying horror of something scary that could happen at any given moment. The makers does a good job of building up the suspense till the two-thirds of the film, especially about the character of Beatrice. Occasionally, the movie tries to trick the viewer with some of its scare tactics that makes little sense when the reveal happens. This could have been avoided or done in a better way.

The third act spins the movie's genre with Beatrice showing her true colours and with the inclusion of a new character, played by Vijilesh Karayad. It enters the revenge territory that is somewhere on the lines of films like I Spit On Your Grave. Though not as graphic as the Hollywood cult film, Krishnankutty Pani Thudangi goes violent and gory in these portions that isn't out of line with the subject it is trying to deal with. Silence – Can You Hear It Movie Review: Manoj Bajpayee Takes the Charge in This Engaging if Predictable Murder Mystery.

Some might find this turn into being a revenge story strange and out-of-place, but the signs were always there. Just look at how predatory Unnikrishnan behaves with a girl he just met, someone who is supposed to his employer's daughter, and then see how Beatrice puts him on his toes as the day turns into night. Also, why would the owner build tunnels and mazes in his house that's as secluded as they come, as if he doesn't want anyone to escape from there? The clues were there for us to pick up.

That said, I found the ending to be disappointing in how generic it turned out to be. Beatrice's trauma is used more as a fodder for its violence which leads to a very predictable way out for her character.  The epilogue, featuring Vishnu Unnikrishnan's favourite co-star Dharmajan Bolgatty in a cameo, feels like it belongs to another film that starred these two.

The true star of the film is Saniya Iyappan. At first, I found her performance to be blank, but that seemed to be more of a deceit. As the movie progresses, we get to see more and more layers in her performance, as she turns from a creeped-out girl to someone who decides to take charge of her life in the most explosive manner. It is a physically and mentally exerting role, and the talented actor does justice to meeting up to the challenge. I wish the writing to her character could have been better in the third act, but Iyappan's act more than makes up for it.

Vishnu Unnikrishnan also puts up a good show as the sleazy caretaker, who kinda deserves the ordeal he goes through in the film. Vijilesh Karayad's character feels like an extension of what he did in Varathan, but he does a splendid job of playing a pervert, seduced into falling into a cesspool created by his own desperation.

- The Third Act Feels Let Down

(The above story first appeared on LatestLY on Apr 12, 2021 06:39 PM IST. For more news and updates on politics, world, sports, entertainment and lifestyle, log on to our website latestly.com).