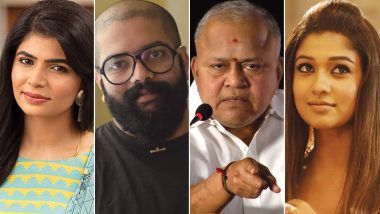 After Radha Ravi’s speech on actress Nayanthara at the Kolaiyudhir Kaalam trailer launch, fans and industry members have just boiled up. There are many who came out in support of Nayanthara and demanded Radha Ravi to be banned from films and also to be suspended from DMK. The chief of DMK released a statement mentioning that they have temporarily suspended actor-partyman Radha Ravi after he made sexist remarks on Nayanthara. Not just that, even KJR Studios decided not to cast Radha Ravi in any of their films. Now amidst all this, National Award-winning singer Chinmayi Sripaada has come out stating how Radha Ravi banned her from the Dubbing Union. Nayanthara Thanks DMK for Taking Action Against Radha Ravi, Actress Requests Nadigar Sangam to Setup Internal Complaints Committee.

Radha Ravi’s derogatory remarks on Nayanthara has left everyone fuming. If you remember, playback singer Chinmayi Sripaada had accused lyricist Vairamuthu of sexual misconduct and filed a complaint against him with the National Council for Women. With the ongoing issue of Nayanthara, the singer gave a reminder on how she was banned by Radha Ravi when she shared two sexual harassment stories by him. She even tweeted, “Just a reminder that this Radha Ravi banned me from the dubbing union. I haven’t recorded one Tamil song since October 2018. So much is the loyalty for Vairamuthu and Radha Ravi. Or is it because or their political affiliations? Celebrate the molesters and ban the women.” Vignesh Shivan Comes Out in Support of Nayanthara, KJR Studios to Ban Sarkar Actor Radha Ravi From Future Projects.

Take a look at the series of tweets that Chinmayi Sripaada posted:

When I shared 2 stories of sexual harassment by Mr Radha Ravi, I got banned.

As of today 12+ cases have been filed, right to work denied by the Mr Radha Ravi’s Dubbing Union on it’s own members. Lakhs spent on legal fee to fight its own, that has been earned by members like me!

If women have to be heard we need to be powerful.

Stay, fight the molesters - because they aren’t stopping any time soon - and get to the top.

We need more women in power.

Checkout what Govind Vasantha had to say:

Music director Govind Vasantha extended his support for the playback singer and tweeted, “@Chinmayi  WILL sing in my films till SHE says NO to me. No one else will decide on behalf of me.” There are many who appreciated the music director’s move. Stay tuned for further updates.

(The above story first appeared on LatestLY on Mar 26, 2019 09:14 AM IST. For more news and updates on politics, world, sports, entertainment and lifestyle, log on to our website latestly.com).