KJR Studios has decided not to cast Radha Ravi in any of their upcoming films after he made a derogatory remark on Nayanthara. 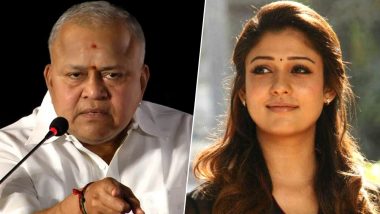 Madras Rajagopalan Radhakrishnan who is widely known as Radha Ravi is known to make controversial criticism of other celebrities. At the promotional event of Nayanthara’s upcoming film Kolaiyuthir Kaalam, Radha Ravi made derogatory remarks on the actress which has left the industry members and Nayanthara’s fiancé Vignesh Shivan fuming. Not just that, KJR Studios has released a statement and clearly mentioned that they will not cast Radha Ravi in any of their films and they’ve also requested others to do the same with the Sarkar actor. South Actor Radha Ravi Disrespects Nayanthara at Kolayuthir Kaalam's Press Meet - Watch Video.

Filmmaker Vignesh Shivan tweeted, “Clueless and helpless cos no one will support or do anything or take any action against that filthy piece of shit coming from a legendary family .. he keeps doing this to seek attention! Brainless ! Sad to see audience laughing& clapping for his filthy comments! None of us”. He also tweeted, “had any idea that this event was going to take place for an incomplete film .. the actual producers or directors left the film few years back I guess! Inappropriate event wit unnecessary people sitting and knowing not what to speak ! If this is called promoting a movie then it’s good to stay away from such events which don’t have any need but jus to give opportunities like this for jobless people to vomit some senseless , useless stuff on stage ! Anyways no one from Nadigar Sangam or any sangam will take any action against him #Sad #state”.

Take a look at the statement released by KJR Studios:

We sincerely condemn Mr #RadhaRavi and will not cast him in any of our films and we will strongly advice our associates and friends in the industry not to cast him either.#Nayanthara #KolaiyuthirKaalam #KJRStudios pic.twitter.com/IHDLBo3s9H

There were many others who came out in support of Nayanthara such as Milind Rau, Chinmayi Sripaada, Taapsee Pannu and more. In fact Radha Ravi’s half-sister Raadika Sarathkumar expressed her disappointment with the former’s comment on Nayanthara. Stay tuned for further updates.

(The above story first appeared on LatestLY on Mar 25, 2019 08:57 AM IST. For more news and updates on politics, world, sports, entertainment and lifestyle, log on to our website latestly.com).