In January 2021, Radhe Shyam director Radha Krishna Kumar had shared a tweet that read, “Teaser update is on the way guys!! Very very soon, till then just be patient!!! I promise your wait be worth a million smiles.” 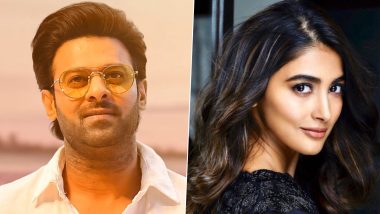 Radhe Shyam is the upcoming romantic film starring Prabhas and Pooja Hegde in the lead. Fans are already in love with the adorable onscreen chemistry of the film’s lead pair. It has been quite sometime since fans have been demanding an update on this much-awaited film. In January, film’s director Radha Krishna Kumar had shared a tweet that read, “Teaser update is on the way guys!! Very very soon, till then just be patient!!! I promise your wait be worth a million smiles.” Well, the makers haven’t said anything yet but rumours are rife that Radhe Shyam teaser would be released on the occasion of Valentine’s Day. Radhe Shyam: Director Radha Krishna Kumar Teases Prabhas Film's Teaser Is On the Way, Angry Fans Demand An Update ASAP!

Valentine’s Day is celebrated every year on February 14, a celebration of romance and love in many regions of the world. Fans of Prabhas and Pooja Hegde have started to post on Twitter that the former would be unveiling the teaser on this special day. And if the reports are to be believed, then it is indeed the perfect time to drop the teaser of Radhe Shyam online. It would make fans’ day even special. Take a look at some of the posts below: Radhe Shyam: Pooja Hegde Wraps Up a ‘Long 30-Day Schedule’ of Prabhas’ Upcoming Film.

Fans Are Thrilled About The Teaser

Radhe Shyam has been shot simultaneously in Telugu and Hindi languages. The filming was delayed owing to the coronavirus pandemic and it was in October 2020 that the team had resumed the shoot in Italy. The final schedule with crucial scenes were shot at Hyderabad’s Falaknuma Palace and was wrapped up in December. The makers of Radhe Shyam are yet to reveal the film’s release date.

(The above story first appeared on LatestLY on Feb 04, 2021 10:15 AM IST. For more news and updates on politics, world, sports, entertainment and lifestyle, log on to our website latestly.com).