RRR Actors Alison Doody And Ray Stevenson Share A Glimpse Of Their Looks From The Sets Of SS Rajamouli Directorial!

Alison Doody and Ray Stevenson would be seen playing key roles in the upcoming magnum opus, RRR, directed by SS Rajamouli. The former has shared a picture on Instagram from the sets of the film. 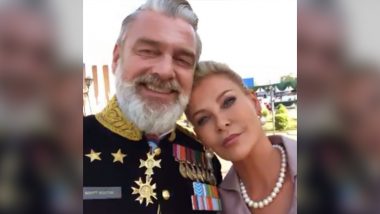 Alison Doody and Ray Stevenson would be seen playing key roles in the upcoming magnum opus, RRR, directed by SS Rajamouli. It was in October end when Alison, who would be playing the role of Lady Scott, had shared a video on Instagram and mentioned that she heading to India for the shoot of RRR. Alison who was travelling in a car was seen wearing a face mask owing to the ongoing pandemic. Olivia Morris, who is paired opposite Jr NTR, had dropped a comment on Alison’s post that read ‘safe journey’. RRR Movie Update: SS Rajamouli and Crew Are Back On Their Extravagant Set, Start The Shoot With 'Double Grit' (Watch Video).

Alison Doody and her co-star Ray Stevenson, who’d be playing the character Scott, have shared a glimpse of their looks from the sets of RRR. The former shared a picture on Instagram in which the duo was all smiles as they posed in their attires for the film. While there are many who are hailing praises seeing the Irish actors’ avatars in the movie, there are a few who have requested the duo to pose with the male lead actors (Ram Charan, Jr NTR) and share a picture on social media. Diwali Special From Team RRR! Ram Charan, SS Rajamouli, Jr NTR Extend Festival Greetings To Fans.

The shooting of RRR had to be suspended owing to the pandemic. The team resumed shooting in October by adhering to the safety protocols issued by the government. Stay tuned for further updates!

(The above story first appeared on LatestLY on Nov 22, 2020 12:34 PM IST. For more news and updates on politics, world, sports, entertainment and lifestyle, log on to our website latestly.com).