RRR: Jr NTR and Ram Charan Join the Sets to SS Rajamouli’s Film to Shoot for the Climax

Rajamouli informed that the most exciting climax is being shot now with the film's characters Ramaraju and Bheem. The picture shared by SS Rajamouli showed two scarred hands holding each other in a firm grip. 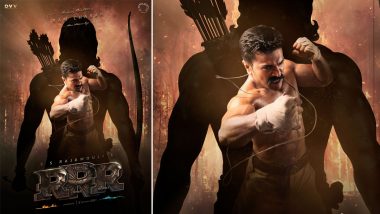 SS Rajamouli's RRR is touted to be one of the biggest films of the year. Starring Jr NTR and Ram Charan, the film will also mark Alia Bhatt and Ajay Devgn's south debut as well. The makers have been living no stones to make the film look magnificent on the big screen and after months of hard work, the pan-India film is nearing a wrap-up. The team has finally arrived at the day where they are now shooting for the climax of the film. To keep up the anticipation and excitement of fans, the director took to his social media to share a still. RRR: All You Need to Know about Jr NTR’s Heroine, Alison Doody!

Rajamouli informed that the most exciting climax is being shot now with the film's characters Ramaraju and Bheem. The picture shared by SS Rajamouli showed two scarred hands holding each other in a firm grip. Sharing the photo, he wrote that his 'Ramaraju and Bheem come together to accomplish what they desired to achieve.' Fans were excited after seeing the photo and this sure has piqued their eagerness to watch Jr NTR and Ram Charan battle it out on the big screen.

The CLIMAX shoot has begun!

My Ramaraju and Bheem come together to accomplish what they desired to achieve... #RRRMovie #RRR pic.twitter.com/4xaWd52CUR

Talking about the film, a source ad earlier revealed, “ The story is written by KV Vijayendra Prasad and it draws instances from the two heroes’ continued fight against the establishment to assert the rights of the tribal community in Telangana region. However, the film steers clear of many crucial real-life events, including the Rampa Rebellion, which led to Raju's death.” RRR will feature Ram Charan as Alluri Sitarama Raju and Jr NTR as Komaram Bheem. RRR: Shriya Saran to Play Ajay Devgn’s Wife in SS Rajamouli’s Magnum Opus?

The film has an ensemble cast, starring Jr. NTR, Ram Charan, Ajay Devgn, Alia Bhatt, Olivia Morris and several others in pivotal roles. RRR is a period drama that chronicles a fictional take on the younger days of celebrated freedom fighters Komaram Bheem and Alluri Seetharamaraju. Directed by ace director SS Rajamouli, the film is bankrolled by DVV Danayya under the banner of DVV Entertainment.

(The above story first appeared on LatestLY on Jan 19, 2021 08:04 PM IST. For more news and updates on politics, world, sports, entertainment and lifestyle, log on to our website latestly.com).