RRR is the upcoming magnum opus directed by the ace filmmaker SS Rajamouli. This periodic drama features Ram Charan and Jr NTR in the lead roles. 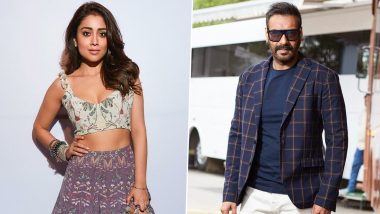 RRR is the upcoming magnum opus directed by the ace filmmaker SS Rajamouli. This periodic drama features Ram Charan and Jr NTR in the lead roles. This film would also mark the debut of Bollywood actress Alia Bhatt in South Cinema and she would be paired opposite the former. Besides Alia, superstar Ajay Devgn would also be seen playing an extended cameo in this movie. It is now heard that Shriya Saran has also been roped in to play a key role in this upcoming flick. SS Rajamouli's RRR to Be the First Film to Resume Shoot With a Limited Crew Following Social Distancing Guidelines?

As per a report in Telugu Cinema, during an interaction with fans on Instagram, Shriya Saran revealed that she is eagerly looking forward to commence with the shooting of RRR. It is also said that Shriya would be playing Ajay Devgn’s wife in this movie, reports Zoom. However, there has been no official update on it yet. Now if the reports are to be believed, then it would be the second time that these actors are being paired up together. This duo had earlier being featured together in the blockbuster film Drishyam. Also, Shriya Saran has collaborated with SS Rajamouli in the past. They have worked together in the film Chhatrapati. RRR Update: Makers Reveal Why They Could Not Release Ajay Devgn's First Look on His Birthday.

RRR is made on a budget of Rs 350–400 crore approximately. Besides Telugu, this film will also be released in Tamil, Hindi, Kannada and Malayalam languages. Produced under the banner of DVV Entertainments, RRR is scheduled to be released on January 8, 2021.

(The above story first appeared on LatestLY on Jun 08, 2020 10:46 AM IST. For more news and updates on politics, world, sports, entertainment and lifestyle, log on to our website latestly.com).