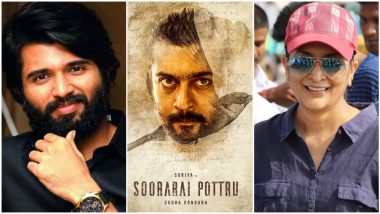 Soorarai Pottru, also released in Telugu as Aakasam Nee Haddu Raa, starring Suriya and Aparna Balamurali in the lead, released on Amazon Prime Video on November 12. The film directed by Sudha Kongara that is partly inspired by events from the life of GR Gopinath, founder of Air Deccan, has received praises from fans and critics. Even Tollywood star Vijay Deverakonda cannot stop going gaga about this newly released film. Soorarai Pottru Movie Review: Suriya’s New Film On Amazon Prime Video Labelled As An Inspiring Tale And The Actor’s Best Outing By Critics.

Soorarai Pottru has undoubtedly turned out to be a perfect Diwali treat for all movie buffs. It had been a long time since Suriya got a hit film to his credit. Be it the narration, direction, performance of the star cast, soundtrack, everything has been lauded by the audience. Vijay Deverakonda has shared a series of tweets highlighting all that he has loved about this film. In fact, he even said that he is looking forward to work with director Sudha Kongara. Vijay Deverakonda Shares A Perfect Family Picture On The Festive Occasion! South Hunk Says, ‘I Had A Mad Good Diwali’.

The Film And Lead Pair’s Performance

@Suriya_offl na - what a terrific performer, you just feel love for him as an actor giving it his all, even backing it as a producer. ❤️ @Aparnabala2 - I kept wondering where does Sudha find these amazing women to play in her films, so real, an actress totally in command.

Direction And Music Of Soorarai Pottru

I dont know how much is true and how much fictionalised - so ordering the book #SimplyFly to read more about Captain's journey... Also Fck people like Paresh Goswami :) Definite watch in Telugu or Tamil - cheers!

Sudha Kongara has directed films in Tamil and Telugu languages as well. Drohi, Irudhi Suttru, Guru are some of her notable works. Meanwhile, Vijay Deverakonda, who shot to fame with Arjun Reddy, will next be seen in Puri Jagannadh’s film, in which Ananya Panday is paired opposite him.

(The above story first appeared on LatestLY on Nov 17, 2020 10:08 AM IST. For more news and updates on politics, world, sports, entertainment and lifestyle, log on to our website latestly.com).