Director Lokesh Kanagaraj has made Vikram as a followup to Karthi's Kaithi. And Suriya's cameo in the ending of Vikram promises a more ambitious sequel, which could bring back Kamal Haasan, Fahadh Faasil, Karthi and Narain. 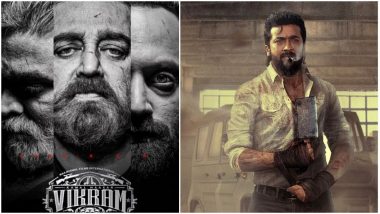 Suriya Sivakumar making a cameo in Vikram is old news now, but what kind of character he is playing and what it means in the larger scale of things in Kaithi-verse - yes, that's a thing now - in Lokesh Kanagaraj's recent potboiler Vikram has only unfolded after the movie's release. So if you have not watched Vikram yet, and are planning to do so, please do not read ahead. For the below article will be filled with plenty of SPOILERS about the action-thriller, starring Kamal Haasan, Vijay Sethupathi and Fahadh Faasil. Vikram Movie Review: Kamal Haasan, Fahadh Faasil and Vijay Sethupathi’s Film Sparks With Thrills and Frills Despite a Lagging Screenplay.

Vikram is not a sequel per se to the 1986 film by the same name, though it shares the same lead actor and comes from the same production house. Vikram, played by Kamal Haasan, is a former sleeper agent of the government who fakes his own death under a different name, so that he can take down a drug ring with the help of other like-minded associates, one of them being Kaithi's Inspector Bejoy, played by Narain. Yup, here is the first biggest confirmation that Kaithi and Vikram are in the same universe, before the movie drops on more such scenes, including a couple of fan-baiting callbacks to Kaithi's protagonist, Dilli.

Fahadh Faasil plays Amar, the head of a sleeper cell, who is asked to investigate a series of murders, one of which is Vikram's fake one. Vijay Sethupathi plays Sandhanam, the ruthless leader of a gang, whose loss of drug consignments have made him even more chaotic and terrifying. He is also responsible for the death of Vikram's son, thus making the latter's war against drugs personal (even if Vikram tries to deny it).

So what happens in the end?

Despite getting Vikram and his infant grandson surrounded in a warehouse where the drug consignments are hidden, Sandhanam and his men couldn't manage to take him down. Vikram, using canon gun and machine guns, shoots down most of Vikram's men and his vehicles, while Amar tries to resuscitate Vikram's grandson, after the kid suffers from a heart stoppage. Vikram Review: Fans Hail Kamal Haasan, Vijay Sethupathi, Fahadh Faasil’s Movie On Twitter; Declare It As A Blockbuster Action Thriller.

In the end, the kid survives, Vikram takes down Sandhanam after a brutal fistfight, and destroys the warehouse with the drugs in it and Sandhanam as well. So there's that, right? Nope!

Even though Sandhanam was terrifying in his way, there was only one person he himself was terrified of - Rolex. While there are only allusions to Rolex in the majority of the movie's screentime, we only see him properly in the epilogue. And he is played by none other Suriya!

So for the first time, the likable Tamil superstar is going to play an out and out villain, and I am all for it! In case you are wondering how reprehensible Suriya's Rolex can be, he chops off the head of his own man when the latter tries to warn him! So it looks like Rolex is going to be the Thanos of this Kaithi-verse.

When Rolex meets his men, we see some familiar faces who update him on his new foes. Two of them - Adaikalam (Harish Uthaman) and Anbu (Arjun Dass) belong to Kaithi, though I am not sure how Anbu survived his apparent death in the Karthi-starrer. They tell Rolex of Dilli, and though we only get to listen Karthi's voice to sing the Kaithi theme song, we learn that Dilli and his daughter is in Uttar Pradesh. Looks like Rolex will be bringing him out from his safe place to take revenge. Which would be interesting, since we would see two real-life siblings clash with each other onscreen. Vikram Star Kamal Haasan To Team Up With Take Off Fame Director Mahesh Narayanan For His Next!

We also learn about what happened to Amar and Vikram after bringing down Sandhanam. Amar, still grieving the killing of his wife, has gone down the same path as Bejoy, and has turned into a masked vigilante. Meanwhile, Vikram is secretly snooping on his widowed daughter-in-law and grandson who have now taken refuge in a foreign country to check for their safety.

What Rolex doesn't know (or does he?) is that Vikram is actually among all the attendees of his meeting. This sets for a face-off between Vikram and Rolex in the sequel, that needs to exists, considering what punch of a moment the film's closing scene is. With Dilli, Amar and Bejoy (who I can say is the Kaithiverse equivalent of MCU's Agent Coulson) also in Rolex's radar, looks like Vikram could be leading this set of Avengers, and there are chances that not everyone would survive from this match. If only Agent Tina was alive! Also, why did Lokesh Kanagaraj never thought of making Thalapathy Vijay's Master also part of this Kaithi-verse?

(The above story first appeared on LatestLY on Jun 03, 2022 09:13 PM IST. For more news and updates on politics, world, sports, entertainment and lifestyle, log on to our website latestly.com).