Bigg Boss 14: Kavita Kaushik Talks About Her Rift With Eijaz Khan, Says She Had Warned Pavitra Punia That 'He Doesn’t Need Love or Friends'

Bigg Boss 14 saw one of its most explosive fights between contestants Eijaz Khan and Kavita Kaushik, before the latter was evicted from the show. While Eijaz did approach Kavita before she walked out of the house, the lady did not stop to talk to Eijaz, which saw him visibly upset. 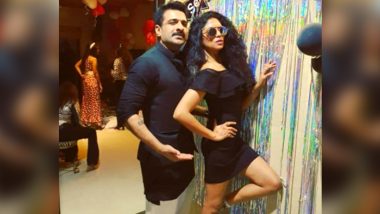 Bigg Boss 14 saw one of its most explosive fights between contestants Eijaz Khan and Kavita Kaushik, before the latter was evicted from the show. While Eijaz did approach Kavita before she walked out of the house, the lady did not stop to talk to Eijaz, which saw him visibly upset. While Kavita also posted a cryptic tweet about knowing one's truth and not caring about what the world says, the actress opened up to a leading daily about her stay in the house, Eijaz Khan and her eviction. Bigg Boss 14: Kavita Kaushik Tweets 'Know Your Truth, Nothing Else Matters' After Eviction From Salman Khan's Show.

Kavita's eviction was sre a surprise for her fans and the Bigg Boss 14 fans. Talking about her exit from the house so early, Kavita said, "I played with my heart and not mind. But I got sucked into somebody else’s game. When I entered the show, Eijaz Khan claimed to be a close friend of mine. Whereas, he is just an acquaintance. I have met him three or four times in 18 years of my career. In 2005, we did a show a together called Kya Hoga Nimmo Ka, in which I was replaced. Then, I met him straightaway in 2019!" Bigg Boss 14 November 02 Episode: Nishant Singh Malkhani and Kavita Kaushik Evicted, Rahul Vaidya Apologises to Jasmin Bhasin – 5 Highlights From BB 14.

"I wanted to do something for dogs and I got to know that Eijaz also does work for dogs and knows a dog shelter. So I contacted him and he took me to the dog shelter. There, we had a general conversation where he told me that he is single. We even shared few of our personal life stories with each other. Next day, I told my husband that I met Eijaz after a long time and he has become a very mature person and I had a great time meeting him. Then, in Feb 2020, my husband invited him for my birthday party and I wasn’t aware about it. So we had a good time and that’s when we clicked a picture together which I posted on Instagram," revealed Kavita to Bombay Times.

She continued, "I remember while I was shooting for FIR, he came on the sets. I was busy shooting and he met the director and left. But all these meetings with him didn’t make him my close friend. It’s only in Bigg Boss that I got to know about his true nature."

Kavita was shamed by many on social media for having revealed about Eijaz's lockdown troubles and subsequent depression. Talking about that, the F.I.R actress revealed, "In March, when the lockdown was announced, I called up all those whom I know who were single. So I called Eijaz also to check on him and how is managing everything alone. So, he told me that there is no cook and it’s getting difficult for him to cook food daily. So out of concern, I cooked something for him which he can stock in his refrigerator for few days. I didn’t do any favour on him, unlike the reports. And I wasn’t making a mockery of him. It was a gesture from my side."

he continued, "You see, it’s a 24-hour show and they show only 45 minutes of the entire day. So my words were taken out of context. I have a picture with Shah Rukh also, does that make him my friend? Inside the show, I got to know the real Eijaz and realised that he doesn’t want friends but chamchas in his life. And I don’t want to be his chamcha. When he mentioned to Salman that I am his close friend, I could have cleared that thing right there but out of respect for Eijaz, I didn’t disregard him and refute his claims, something which I should have. Infact, this went against me and Rubina Dilaik nominated me."

Talking about how Eijaz did not behave like her close friend at all in the house, Kavita recalled, "And what close friend is he blabbering about? Inside the house, I invited him to sit with me while I was having food. And he simply ignored that. He doesn’t need love or friends; I told this to Pavitra Punia. But that time, she didn’t listen to me. And look at the situation now. I saw in the promos that instead of saving her, Eijaz saved Jasmin Bhasin, leaving Pavitra in tears.”

“The biggest lesson that I have learnt is that you have to standup for yourself and you have to conscious of who yours friends are and who aren’t. Also, I want to say this on record that I am not a friend of Eijaz Khan and never want to be responsible for his actions," concluded Kavita, before adding that she can't really talk abot entering the house again as a wildcard entrant.

(The above story first appeared on LatestLY on Nov 05, 2020 05:15 PM IST. For more news and updates on politics, world, sports, entertainment and lifestyle, log on to our website latestly.com).