Nikki Tamboli has been confirmed for Bigg Boss 14. The channel released a new promo of the actress meeting Salman during the premiere. 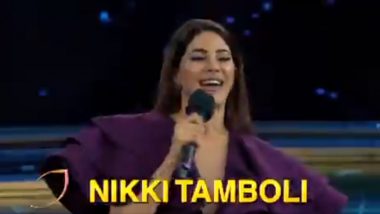 When Colors released a teaser video of a woman dancing on the Dilbar song for Bigg Boss  14, everyone knew it was South actress Nikki Tamboli. Today the channel released yet another promo of the actress; this time confirming her entry into the house. The actress looked quite happy to be part of the show. Salman Khan's presence might have something to do with that as the actress can be seen blushing. As per the promo, Salman seems taken by her too. But that's not even the best part of the video.  Nikki Tamboli in Bigg Boss 14: Age, Career, Controversies and More – Check Profile of BB14 Contestant on Salman Khan’s Reality TV Show

Nikki Tamboli reveals that she has learned a new skill just for Bigg Boss. She didn't know how to flirt and for the show, she has learned it. Well, it seems Nikki is aiming to have a love story inside the house. That has helped many in the show from Upen Patel and Karishma Tanna to Sidharth Shukla and Shehnaz Gill.

It will be interesting to see how Nikki uses her newly acquired skill inside the Bigg Boss house.

(The above story first appeared on LatestLY on Oct 03, 2020 01:14 PM IST. For more news and updates on politics, world, sports, entertainment and lifestyle, log on to our website latestly.com).