Bigg Boss 14: Sidharth Shukla Says 'I Have a Girlfriend At Home' and SidNaaz Fans Are Already Shipping For Him and Shehnaaz Gill!

When Gauahar touched him during a task, Shukla quipped saying, 'I have a girlfriend at home.' 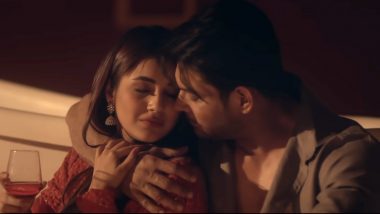 In Bigg Boss 14, 'senior' contestant Sidharth Shukla is garnering all the attention. The winner of the previous show is right now in the BB house to allot tasks and keep an eye on the current contestants. He is accompanied by other two 'seniors' Gauahar Khan and Hina Khan, who have been part of past seasons. However, the latest trend on social media is 'I have a girlfriend at home.' This was the statement that Sid recently made in an episode and fans were reminded of BB 13 contestant and his 'good friend' Shehnaaz Gill. Shehnaaz Gill’s BTS Video in a Blingy Outfit Dancing Her Heart Out Surfaces Online and We Are Excited to Watch Her Full Act!.

When Gauahar touched him during a task, Shukla quipped saying, 'I have a girlfriend at home.' That was quite a revelation on the national television. Even though, he did not take any specific name, SidNaaz fans are optimistic about Sid and Shehnaaz connection. However, none of them have confirmed dating each other in or outside the show yet.

SidNaaz Fans Are Beyond Happy

I HAVE A GIRLFRIEND AT HOME #SidNaaz pic.twitter.com/TiwUMk7hAf

These two forever gonna be special

SID : I HAVE A GIRLFRIEND AT HOME

The speed at which #SidNaaz lovers trends this ~ pic.twitter.com/o0NY2iJEgR

Q: Who has a girlfriend at home?

On the show, he also went on to describe what kind of boyfriend he is. He said that he is not a mushy person who would buy flowers for the girl. However, he also admitted to taking her out on dinner dates and long drives. Now, is it about Shehnaaz or someone else, only those two stars can tell!

(The above story first appeared on LatestLY on Oct 21, 2020 11:57 AM IST. For more news and updates on politics, world, sports, entertainment and lifestyle, log on to our website latestly.com).