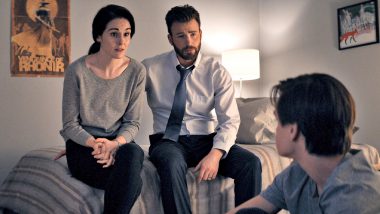 Chris Evans, Michelle Dockery and Jaeden Martell starrer Defending Jacob is the current hot thing amid the series binge watchers. The crime drama series' first season has become a massive hit, that streams on Apple TV. However, the makers left the ending of the first season with a mysterious ending. As the story is now sort of on a cliffhanger, the fans are wondering whether there will be any second season or not! Chris Evans Opens Up On Why He Agreed To Play Captain America After Rejecting The Role Several Times.

For those who have not followed, it is a story of a 14-year-boy called Jacob, who is accused of murdering one of his classmates and the case related to it. It is an adaptation of the novel by William Landay of the same name. So to be specific, the fans did not get an answer to 'who killed Ben.'

What is even more mysterious is the renewal of the series with season 2. There are no plans laid as of now about the renewal and hence, there is an overall air of curiosity around this whole plot and the second season as well. There is also no word now whether Evans will be available for the shooting of the next season anytime soon after the lockdown. Hence it is speculated that even if the second season materializes, it will be only in 2021 or worst...2023! The series was reportedly supposed to be a film initially but was later on turned into limited series.

(The above story first appeared on LatestLY on Jun 01, 2020 04:39 PM IST. For more news and updates on politics, world, sports, entertainment and lifestyle, log on to our website latestly.com).