Given the on-going lockdown, we have seen many from the television and film industry suffer from monetary issues. Also, the issue of non-payment of dues of the cast of Zee TV's Humari Bahu Silk, brought to light how when it comes to monetary issues, the glamour industry is not so glamorous after all. 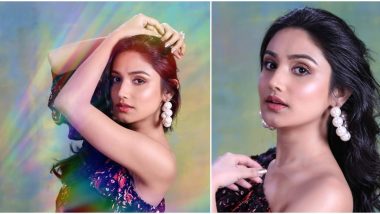 Given the on-going lockdown, we have seen many from the television and film industry suffer from monetary issues. Also, the issue of non-payment of dues of the cast of Zee TV's Humari Bahu Silk, brought to light how when it comes to monetary issues, the glamour industry is not so glamorous after all. For those unaware, the TV industry has a 90-day payment rule, which means that the artist working on a show, will receive his/her payment only after 90-days. And one of the first actresses to acknowledge that this system of payment is a problem, especially when there is a crunch of finances this time, is actress Donal Bisht, who became a household name with jer stint in Sony TV's Ek Deewaana Tha. Ek Deewaana Tha's Donal Bisht Raises Temperatures In A Fluorescent Pink Bikini (View Pics).

In a chat with a leading portal, Donal, who was last seen in Dil Toh Happy Hai Ji, went on to explain how there is no lack of funds stashed with producers and the channel and hence, they can afford to start paying up actors from the very first month of their shoots, instead of following the 90-day payment rule. Donal Bisht On Replacing Jasmin Bhasin in Dil Toh Happy Hai Ji: As Far As I Am Not Shown To Have A Baby Bump It's All Okay For Me'.

"People don’t know that actors have to wait for 90-days, which later stretches to four months at times. Even I was shocked when I entered the industry. I didn’t know that I will get paid after 3-4 months. Thankfully, I was working before. Whatever savings I had, I divided my expenditure for four months," Donal, in a conversation with ETimes TV revealed.

She also warned actors who plan to enter the industry in the future to be careful and have a backup option. "All those who are listening to me right now, if you want to become an actor, come with a backup. There should be savings. Don’t leave behind everything and struggle here." Late Actor Manmeet Grewal&#8217;s Wife Confirms He Was In Depression Over Non-Payment of Dues and Loans (Details Inside).

The past month saw actor Manmeet Grewal and actress Preksha Mehta end their lives due to problems pertaining to delayed job opportunities and lack of them in the entertainment industry. Addressing these deaths, Donal maintained how important financial stability is for an actor and said, "It is a request to all the channel and production house, please lift this 90-day payment rule. It is sad as it becomes difficult to survive for four months with no other income. People are killing themselves. People are killing because you are not paying. Why can’t you take responsibility and see to it that people don’t take such a drastic step? Production and channel houses have a lot of money. They have crores. Can’t they pay 5-10K per day basis? Per month payment should be applied."

Donal sure has a valid point here. The actress, who is based in Delhi, has stayed out in Mumbai, despite domestic flights having resumed their operations, as her family asked her to stay put and stay safe.

(The above story first appeared on LatestLY on May 28, 2020 01:26 PM IST. For more news and updates on politics, world, sports, entertainment and lifestyle, log on to our website latestly.com).