Bigg Boss 15 premiere night was wild, fun, and full of surprises. Right from the lavish BB house, hearing the voice of the Vishawasuntree to some surprises. Check out the top happenings from the Salman Khan show's grand launch here. Read on! 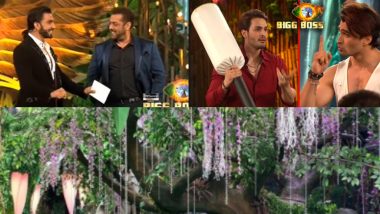 Bigg Boss is back with a bang! The fifteenth season of the controversial reality show is expected to be one of the most exciting ones considering, the many twists and turns in the game. Talking about Bigg Boss 15 grand premiere, it was LIT. Right from Salman Khan’s presence as the host to the sizzling dance of all the contestants, BB 15 launch day was superb. The show aired on Colors TV at 9.30 pm. This year, the housemates will have to survive the jungle first to make their way to the main house. Well, not just this, on a premier night, even Asim Riaz and Ranveer Singh made their presence felt. Here’s looking at the top happenings from Bigg Boss 15 grand launch. Read on!  Bigg Boss 15: From Karan Kundrra, Umar Riaz, Tejasswi Prakash to Shamita Shetty – Meet the Contestants of Salman Khan’s Reality Show!

If it’s Bigg Boss' grand launch, then how come we will not see the host, Salman Khan dancing. On the premiere night, the superstar grooved to his Bollywood hits Jungle Hai Aadhi Raat (Biwi No 1) and Swag Se Swagat (Tiger Zinda Hai). Check out his performance below.

As the Swaragini actress Tejasswi wins 'guess the vegetable' game against Vishal Kotian on the premiere stage, she gets a chance to make her own survival kit to live in the jungle-themed Bigg Boss 15 house. She picks a stove, eatables, pot, and lots more. Smart she!

For the first time in Bigg Boss history, the makers have introduced, Vishwasun TREE concept. So, basically, it is a speaking tree that will elevate the beauty of the jungle-themed Bigg Boss house. The aim of the tree will be to manipulate the game and assign tasks that will have their plus and minuses. The voiceover of the tree is done by none other than Rekha.

We didn't expect this on the premiere stage, but it's Bigg Boss and anything and everything can happen here. Talking about the same, when Salman made Donal Bisht judge tasks between Ieeshan Sehgal and Umar Riaz for the survival kit, the two guys had a verbal tiff. There were two rounds and in the end, Donal declared Ieeshan as the winner. But it was during the task, Ieeshan blasted Umar, as the latter hit him in the head.

We wonder, what's this new twist in the tale, as while all the contestants entered the Bigg Boss jungle-themed house, it was Ieshaan Sehgaal and Donal Bisht who were blindfolded and taken in a jeep to BB Camp. Ieshaan even was seen requesting the makers for food. Bigg Boss 15: Rhea Chakraborty Rubbishes Rumours of Being a Part of Salman Khan's Reality Show.

Afsana Khan while interacting with Salman Khan on the premiere day revealed that she has put her wedding on hold to enter Bigg Boss 15. However, she confessed that she is engaged and also spoke aww things about her fiancé. She is the singer behind the hit, Titliaan Warga song!

While Ranveer Singh was seen on the controversial reality show to promote his upcoming Colors TV show The Big Picture, whereas, Bigg Boss 13 runner-up Asim Riaz made his presence felt for his brother Umar Riaz. Right from Salman pulling Asim’s leg to Ranveer-Sallu setting the stage on fire with their banter, what a great watch.

That's it, guys! These are the top happenings from Bigg Boss 15 launch day. On Sunday's (October 4) episode, we will get to see Bigg Boss OTT contestants Shamita, Nishant, and Pratik interacting with Salman Khan on the main stage.

(The above story first appeared on LatestLY on Oct 03, 2021 01:24 AM IST. For more news and updates on politics, world, sports, entertainment and lifestyle, log on to our website latestly.com).