Euphoria Season 2: Fans React Hilariously to the Intense and Crazy Scene Between Cal and Fez at the End of Episode 3! (SPOILER ALERT)

In the third episode of Euphoria Season Two, Cal believes that Fez has the tape of the video that has the evidence of his crimes, what follows is a one side beating. 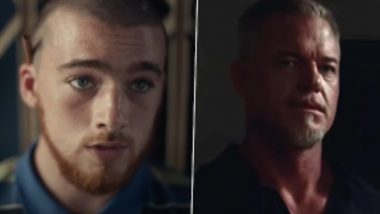 Euphoria’s second season has been trending, and for one reason that left fans shocked. Episode three of Euphoria Season Two saw the culmination of last week’s set up. In episode two we saw Cal Jacobs find out that it was Fez who beat up Nate. Cal scopes out his store and leaves there giving him a mild threat, Fez is left unfazed but a bit curious. Knowing that Fez is the one who beat up his son, Cal is definitely going to go down the path of revenge, and that’s exactly what happens. Euphoria Season 2 Episode 2 Review: Zendaya’s HBO Show Delivers an Intense Episode With an Interesting Love Triangle at the Centre! (LatestLY Exclusive).

In the third episode of Euphoria Season Two, Cal believes that Fez has the tape of the video that has the evidence of his crimes, what follows is a one side beating. With Ash holding a gun to Cal’s head, Cal ends up admitting a crime to Fez that he didn’t even know about. While the scene itself is quite serious, the context of it is quite hilarious. This has sent fans on Twitter to hilariously meme the scene, with many calling out Ash to be the MVP of the scene, and honestly, some of them are quite funny. You can check out the reactions down below. Euphoria Season 2 Review: Zendaya’s HBO Series Returns With a Tense But Surprisingly Shallow Episode! (LatestLY Exclusive).

Cal when he realized Fez didn’t have a clue what he was talking about #euphoria pic.twitter.com/GM8fuAACB1

Man Didn't Even Have a Clue...

no bc cal was sitting there confessing all his sins to fez and fez was like ??? #euphoria pic.twitter.com/h5qmnLr43O

The MVP of the season so far #Euphoria #EuphoriaHBOMax pic.twitter.com/Lu6cL3yXRn

HE DIDN'T DO ANYTHING WRONG...

(The above story first appeared on LatestLY on Jan 24, 2022 07:15 PM IST. For more news and updates on politics, world, sports, entertainment and lifestyle, log on to our website latestly.com).