Hina Khan Opens Up About ‘Chandivali Studios’ Remark: ‘I Have Worked Hard to Be Where I Am’ 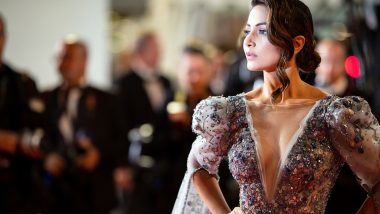 The gorgeous diva Hina Khan, who is known for her outstanding sartorial choices both on and off screen, recently made her debut at the red carpet of the ongoing Cannes Film Festival 2019. The actress, who rightly chose her outfit, sported a grey heavily embellished and stonework gown with a plunging neckline, long trail and dramatic sleeves. She grabbed attention from all quarters of the world. While the actress' social media accounts are flooded with praises and wishes from her fans and colleagues, a media personality mocked Hina's appearance at Cannes and took to social media to post an Instagram story stating quite an unpleasant comment for the actress as he wrote,"Cannes has suddenly become Chandivali studios kya?" Hina Khan at Cannes 2019: Here’s All About the Ziad Nakad Gown and Actress' Look From the Big Night

However, Karanvir Bohra, Nakuul Mehta, Arjun Bijlani, among others, came out in Hina's support and slammed the journalist for making the uncalled remark. Now, Hina too opened up about the on Chandivali remark. Speaking to Hindustan Times, the actress said, "I have worked hard to be where I am. I know how I managed to shoot the film and my TV shoot. But, I can never play a victim as I have confidence in myself and I will prove my worth with time, with God’s grace. And I am grateful that so many people stood by me." Hina Khan’s Cannes 2019 Look: Journalist Apologises for His Insensitive Remark, Here’s How the Actress Reacted

Talking further about the journalist's unpleasant remark, she added, "I did feel disheartened to hear something like that. Why would someone look down upon TV? Give us the opportunity and we will shine. If you can’t say anything good, don’t say this either." Meanwhile, thanking everyone for all the love and support she received, Hina also said, "I am not a Bollywood celebrity; I am a TV celeb, so I was nervous and didn’t know if people would even acknowledge me. I have been overwhelmed with the reactions. I have cried seeing all the love and support I got. Thank you everyone. I know I have to work even harder now." Hina Khan Has a Heartfelt Message for Priyanka Chopra About Her Experience at Cannes 2019; Here’s What the Actress Has to Say (View Pics)

On the professional front, Hina, who has bid adieu to the popular daily soap Kasautii Zindagii Kay 2 as she is all set to sail the boat of her Bollywood career, will soon be seen in Arijit Singh's next music video titled "Raanjhanaa", in which she will be paired opposite Priyank Sharma. Hina has also bagged another project, which is going to be a women-centric film and will be helmed by popular filmmaker Vikram Bhatt! Stay tuned to LatestLY for further updates.

(The above story first appeared on LatestLY on May 20, 2019 03:57 PM IST. For more news and updates on politics, world, sports, entertainment and lifestyle, log on to our website latestly.com).